Apple iPhone 6s went on sale today with hundreds of fans waiting in the queue to buy the new Apple iPhone 6s. We have a small video about the launch of iPhone 6s launch in Apple Store in London’s Regent Street.

Apple event cannot be completed without Samsung muscling in but it looked like Samsung literally failed to troll Apple this time with it’s anti-Apple advertising campaign. Samsung  hired few people to wear backpack displaying advertising banners of Samsung Galaxy Edge +  outside the Apple store in London with a slogan “The itch to switch just got better.” 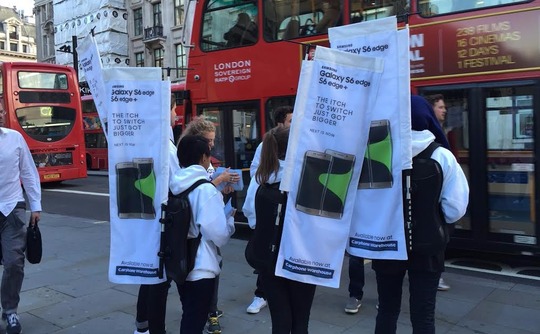 This is not it, Samsung marketing team distributed branded blankets, pillows and bottles which were emblazoned with the hashtag #NextIsNew to those people who were in queue since overnight. Samsung London team tweeted “Queuing is so overrated… Why queue when you can get the Galaxy S6 edge+ right now” and many other series of tweets.

Iris is the company which handles the global marketing for samsung and Iris has been actively advertising against Apple since the launch of iPhone 5 three years ago but this is the first time that samsung actually paid some people to troll an iPhone launch.

What do you think about this Anti-Apple advertisment ? can it work or it will backfire the samsung brand? will Apple try to troll a Samsung event launch ?