Its on, the battle to parade India into the globally top acclaimed ranks. With Indians having taken over Social Media and E-Commerce Giants. We are everywhere. Even on the Moon! Here is one booster doze for the Patriot inside each fellow Indian. We are Information Technology, We are the CEOs, We are the Builders the Movers and Shakers. We RUN practically everything on the planet. All major industry, an Indian is heading! Its us. There is no doubt its us. The Superior Third Kind, the Higher Intelligence Community. We can propel the world with Unity in diversity while steering the earths Rocket into the Upper Atmosphere. The most diverse nation is now leading a multi-dimensional trend in creating a dent in the Global Socio-Economic Community!

That being said, our Prime Minister is doing a Vlog with Bear Grylls the outdoor specialist! After throwing a Star Wars Jargon at Wolverine Himself! And addressing a Coldplay Concert via Video Conference speaking to a live audience at an overnight live MUSIC FESTIVAL in Mumbai, the Prime Minister has now decided to take a trip to the wild side! The Great Outdoors, the unforgiving terrain, the ravenous mountain trails, the serpentile lakes. We have it all, and now we have Bear Grylls trying to play a live tough Special Forces Bodyguard to the worlds most influential man, after Putin. Narendra Damodardas Modi.

Though nothing can be summed up at best and in full; Here’s what to expect:

How many countries can claim they have had their acting Prime Minister/President on the worlds most popular reality show hosted by the discovery channel. The sheer thrill for Modi lovers and haters alike will be the fact that they will see a prolific political figure last his might out in the great outdoors! Surviving with the world’s best-known outdoor survival specialist! One could not help but wonder, will it include some Snail Biting Action? If you know what I mean!

Bear Grylls cannot be anointed a title other than the Untamed Human. Living inside the hollow caved ins of a dead camel to eating maggots for protein, there is going to be basic fundamental survival tips for sure. Lighting a fire without equipment, pitching a tent, conserving rain water as a potable source of reusable water are a few I could think of, add more in the comments section…

Modi being Modi, a master orator, has to spin in his word puzzles to highlight how the key political aspects of the Indian Economy are being taken care of while he learns how to swim on a log of wood. He will make sure the right message is conveyed to the right audience through this gesture of Inter-National Television Shenanigan. 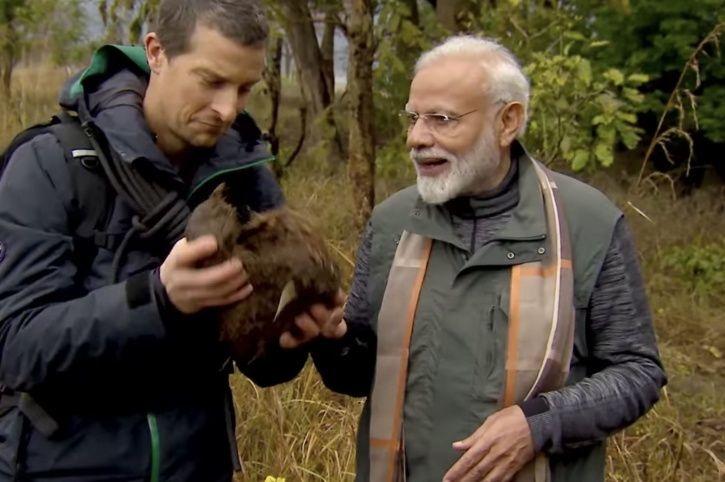 A proud ex-hermit, he has sought holiness and exhaled deep breaths of contentment and detachment, through his learning journey of surviving the great outdoors, there are going to be quite a few, life lessons taught to the general “Educated Middle Class” that knows of Bear Grylls in the first place! Because the audience they are catering to may be the Largest Democracy of the World, but their target audience is definitely the whole world, that is deeply connected with Spirituality, Peaceful Co-existence and Harmony towards all ethnic cultures and what better a way than to show it through gestured behaviour in the tough wilderness!! It’s a master stroke replacing Akshay Kumar with Bear Grylls for post-election reminder that work is being done as we speak!

There is nothing short of entertainment when we see Mr. Modi trying to cross a river in something that looks like a modified tarpoline kayak. Imagine seeing Kim Jong Un jump butt naked into a pile of cash like Mad Uncle Scrooch!! Or imagine Donald Trump, create a bigger and larger more known version of his ROAST. Yes you read it right, there has been a ROAST of DONALD TRUMP and the mainstream media doesn’t know that it was hilarious. The president was truly burnt blunt with mind altering abusive phenomena! That being said, the third world internet hooked nation of India will be proud recipients of old school, family friendly home entertainment humour! That is what to expect, not Kim Jong in a sea of cash!!

The harsh fact that the current government has moved over petty name calling by creating committees for problems and increasing the level of bureaucracy at all level by promoting red tapism, is now over! Indian police take Pictures with their hand held cameras at signals for E-Challan to be issued to individual helmet defaulters! That’s who we are. We used technology in such a way that it did not replace the human employment generation! Instead of steadfast motion sensing cameras… We created a Banglore based application to capture number plates and issue penalties to traffic defaulters! That’s who we are and there will be no short hyperbole of the actual tangible ssuccessses in improving the systems of Infrastructure, Road-Ways, Communication, Diversification of Produce, High Seas Trade etc. The Society needs to move over the highlighted problems of Poverty and illiteracy one day at a time! Today we are the fastest growing private sector in the Education Industry!! That happens with empowering private players and it too has to be done from the TOP! There will be a lot of talk to substantiate true hard work!