This train will give you the feeling of traveling back in time as you meander through the Rajasthan state. As per Rajasthani tradition, you will be welcomed by the Turban-wearing attendants as soon as you reach the station platform. They will give you a brief idea about the arrangements on board and will also give you the coupons which you can use throughout the journey on Palace On Wheels. The train will travel at night and you will be able to explore the beautiful place in Rajasthan during daytime.

Route of Palace On Wheels:- Palace On Wheels is a one week long journey which starts from Safdarjung Railway Station in New Delhi. It will cover mostly all cities of Rajasthan like Jipur, udaipur, Jaisalmer, Agra, Jodhpur, Sawai Madhopur and Agra.

Travel Info :- Palace on wheels runs from September to April end every year.

Cost :- From October to March per night Rs 36000 per person on double occupancy and from April to September per night Rs.26,500 per person. Rates include Meal, accommodation, entrance fees to monuments and sightseeing tours.

This train goes to hugely popular places in Rajasthan which is slightly different from popular train Palace On Wheels. what makes this train different from others is it’s royal style and unabashed lavishness. 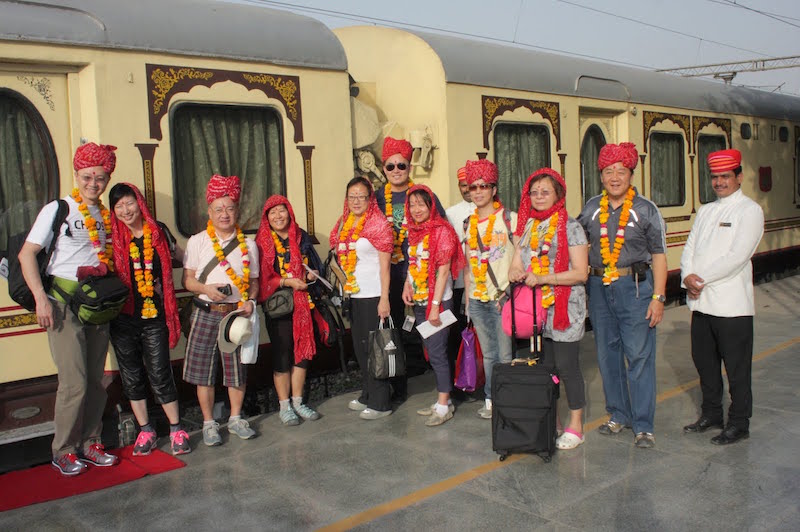 Route of Royal Rajasthan On Wheels :- The starts from Delhi and moves towards Sawai Madhopur, udaipur, jaipur, Agra, Bharatpur and Varanasi.

Travel Info :- Every year Royal Rajasthan On Wheels runs from September until the end of April.

Cost :- Per night Rs. 38500 per person for double deluxe saloon (twin share) and Per night Rs.104500 per saloon for A super deluxe saloon (suite). This rate includes meals, accommodation, entrance fee to monuments, sightseeing tours. service charges for  spa, alcohol and other business facilities are additional. service tax charge is 3.09%  and you will be charged extra 10% on christmas and new year’s eve.

The Golden Chariot is named after the famous Stone Chariot in Hampi, the train travels through many historical heritage places, golden beaches and wildlife. The Golden Chariot has two train, one in Karnataka named  The Pride of the South and the other in Tamil Nadu and Kerala named Southern Splendor.

Route of Pride of the South :- The train departs from Bangalore and moves towards Nagarhole National Park, Mysor, Mysor palace, Srirangapatna, Belur, Halebidu then into world heritage site in Hampi, Badami and Pattadakal and lastly beaches of Goa before reaching back to Bangalore.

Route of Southern Splendour :-  This train also departs from Bangalore and travels through Pondicherry, Tamil Nadu and ends the amazong journey in Kochi.

Travel Info :- Like other trains Golden Chariot also runs from September to April every year. Passengers can hop on and hop off any time they want but they need to spend at least three nights in the train.

Travel Info:- The train runs from September to April every year but has limited departure dates once a month.