Comedy Nights Bachao is set for a total revamp that was on air for a year now on Colors TV. Our City, Vadodara has given many talented artists to the entertainment industry. Manan Desai a former Radio Jockey at Radio Mirchi, is now a part of new team of Comedy Nights Bachao Tazaa! 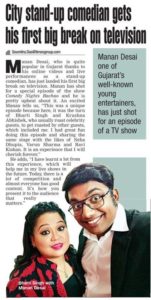 Manan is a stand up comedian at ‘The Comedy Factory’ which people of Vadodara just loved. We also love to watch the YouTube videos these guys made, they are just drop dead hilarious.

The First show was aired on 25th September and it was a hit already. The show is now hosted by Mona Singh, of Jassi Jesi Koi Nahi. Previously who hosted the show were Krushna Abhishekh and Bharti Singh who will now be featured as contestants on the show.

Not just the host, but all the others from the first season are replaced by a fresh new cast of celebs. The new faces on the show will be Sumeet Vyas, Nia Sharma, Sharad Malhotra, Aditi Bhatia, Amruta Khanvilkar, Sumier Pasricha, Manan Desai and Balraj Syal.

The show had been facing very low TRP ratings and not many film makers wanted to promote themselves on this show previously. 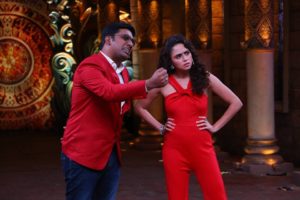 Due to the insult comedy format that they used on the show, many actors did not want to promote their films on Comedy Nights Bachao, some of which are Hritik Roshan, Akshay Kumar and Jacqueline Fernandez.

The new format of the show is that the celebrities will be insulting the comedians on the show in return. I hope they have fun doing that!

All in all, we congratulate Manan on this achievement he brought to all of us. Let’s cheer for him and hope more people bring out their talents and make our city proud!