Our favorite James Bond, Pierce Brosnan, is the new spokesperson of Pan Bahar, the Indian Pan Masala brand. He not only made a lot to say for people on the internet and all over India when the picture of him holding the pan masala made it to the cover of national newspaper, but he has also made a video ad of the same.

Pierce is trending on twitter and on other social media sites too. Not because he has a new bond movie coming up but because he is endorsing a Pan Masala brand, Pan Bahar, that is known to be injurious to health. 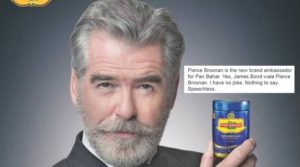 In the video advertisement, you can see Pierce pulling bong like stunts using the small tin pack of Pan Bahar and in the end everyone claps for him because of all the smart moves he made by using Pan Bahar and says, “Pan Bahar – class never goes out of style” in an English accent.

Pan Bahar previously has been endorsed by Feroz Khan, Fardeen Khan and Saif Ali Khan and it also had drawn issues regarding health concerns.

In fact, there was a quiz on the website of Pan Bahar with a picture of a man without a face asking people to recognize the new ambassador of of Pan Bahar and win prizes. The answer was to be disclosed on 7th of October. 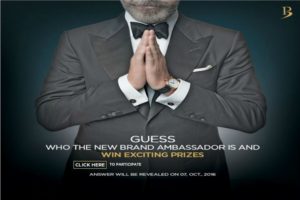 “I am very excited to be chosen as the brand ambassador of a brand like Pan Bahar. Pan Bahar, like Bond, has stood the test of time and is a winner in its own right. It has got class. That’s something that never goes out of style,” said Brosnan in a statement

Pierce Brosnan endorsing gutka came as a shock to people and they cannot stop making jokes about the same. Here are some you should see. 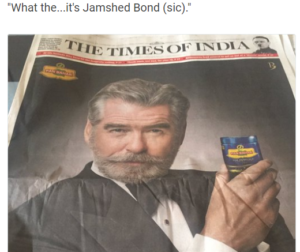 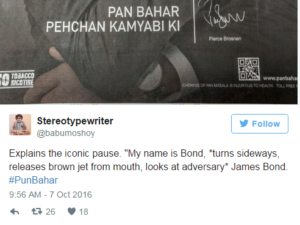