Being a star kid, Abhishek Bachchan has been under fire many time due to comparison with his superstar father Amitabh Bachchan and Abhishek has often been overshadows. 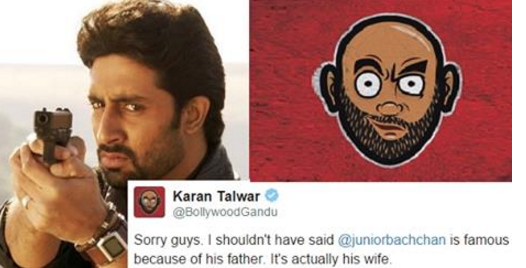 Bollywood Gaandu has a strong openion about Junior Bachchan and he took it to twitter and randomly a tweet war started between Abhishek and Bollywood Gandu.

Checkout how things went down :-

Life is not about answers but questions. Where is my career going? Am I making enough money? Why am I still following @juniorbachchan?

Abhishek replied back quickly as he is pretty active on social media.

@BollywoodGandu here are the answers: 1. Nowhere 2. For your skill set? Hell yeah! 3. I don’t know. I unfollowed you years ago.

.@juniorbachchan looks like you and I have a lot in common. Except whatever little I’ve made of myself – it’s without my papas help.

@juniorbachchan what to do, this is why the career has gone nowhere.

@BollywoodGandu and unlike you…. Whatever I am today is because if my family. And am very proud of that.

Bollywood Gandu got a bit personal

Sorry guys. I shouldn’t have said @juniorbachchan is famous because of his father. It’s actually his wife.

Finally some one from bollywood made a special appearence to solve this matter, Guess what it was KRK LOL !!

According to my news @juniorbachchan is going to start best n biggest film of his career soon. And I can say tat it’s the right decision.

Some bromance erupted between KRK and Abhishek on twitter

You are welcome bro @juniorbachchan