Vijay Mallya The flamboyant liquor baron and once called King of Good Times and Indian version of Richard Branson, Mallya is being chased by almost all financial institutions like Banks, the judiciary, regulators for his debts of Rs. 9,000 crores which he has to payback.

How did Vijay Mallya become Bankrupt ?

Vijay Mallya is personally held accountable for the failure of his delayed repayment of loans and Kingfisher Airlines Business.  Since 2012 Vijay Mallya’s fortune has stuck and it seems luck is no more with The King Of Good Times. In 2012 Kingfisher airlines was grounded, then came in the battle for Mangalore Chemicals and Fertilisers and now United Spirits (USL) – India’s largest liquor maker doesn’t want Mallya in the company any more.

All this spiced up war in USL started in April 2015 when a major stake was acquired by Diageo in 2013 and Diageo asked Vijay Mallya to step down as the chairman after internal dispute.

Vijay Mallya declined to Resign as Chairman of United Spirits. He said in a statement :- “I have been flooded with media queries of different types, inferences and speculation. All I wish to say is that I intend to continue as chairman of USL in the normal manner,” 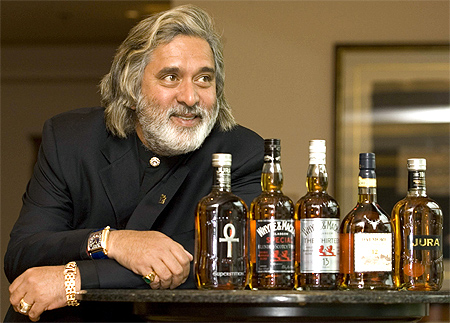 How Did Vijay Mallya Become A Millionaire ?

Vijay Mallya’s innings at United Breweries was started in a different way. At a very young age of 28 Mallya inherited UB Group from Vitthal Mallya his father who died in 1983. As student Vitthal Mallya saw a spark and opportunity in United Breweries Ltd which was started a Scotsman Thomas Leishman in Chennai in 1915.  Vittal Mallya kept on buying UBL’s shares and eventually elected to the company’s board at a very young age of 22 years and within a spear of one year he was mad chairman of the company. Vitthal soon made a string of acquisitions and diversified into sectors like food and pharmaceuticals.

The acquisition spree continued continued when Vijay Mallya took control of the business empire after death of his father Vijay Mittal in 1983. Some of Mallya’s buys included Best and Crompton in 1988, Berger Paints, which was sold later, Malabar Chemicals and Fertilisers in 1990.

The Down Fall Of Vijay Mallya

“The king of good times” faced major troubles in 2012 at the age of 59 when Kingfisher Airlines was shut down due to heavy financial loss as Kingfisher Airlines did not made any profit since it’s launch in 2005. But still Mallya kept on spending extravagantly on marketing and advertisment.

The company fell into huge debt when Kingfisher acquired Air Deccan in 2007. Within just 5 years the company had stopped it’s operation. The company was declared a wilful defaulter by some banks. Kingfisher Airlines owns more than $1.2 billion (Rs 7,500 crore) to lenders.

Though Kingfisher Airlines was at the verge of collapsing, Mallya threw away $ 1.8 million in an auction in New York in 2008 to buy Mahatma Gandhi’s belongings. In 2003 Mallya had spent Rs 1.5 crore to buy the sword of the former ruler of Mysore, Tipu Sultan.

But by 2012, Mallya’s business started to collapse and made huge loss, thus Mallya lost the title of Billionaire tag.

In October 2014 Mallya got into battle for Mangalore Chemicals and Fertilisers to control stakes. The company is worth Rs 3,700 crore. Diageo wants Mallya to step down as the chairman but Dr Mallya says that he has a contractual agreement to hold his position on the board with Diageo.

Currently Vijay Mallya has to repay the loans he has taken worth Rs 9,000 crore to 17 banks in india.

Now only GOD can save the “KING OF GOOD TIMES”