by Gaurav Moorjani 7 years ago7 years ago
1.4kviews
70

Recently in the Copa Del Rey Real Madrid won 3-1 against Cadiz but they come under serious trouble when the team had fielded a player who was ineligible. Russian Player Denis Cheryshev started for Real Madrid in the following match despite picking up the third yellow card in last season’s semi finals when he was on loan to Villarreal. 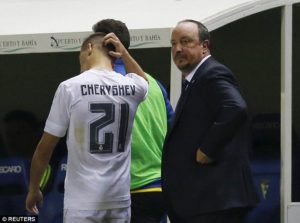 During the game Real Madrid came to knew about the error and soon substituted Cheryshev,  with head coach Rafael Benitez saying they wanted to “show good faith”.

With the exit Of Iker Casillas, last moment issues in transfer of David De gea and now the exit of Real Madrid from Copa Del Rey club president Florentino Perez is under pressure as such a situation is never expected from a club of such high stature.

On playing the ineligible Cheryshev, Perez said: “Nobody told the club or the player, not the federation nor Villarreal, so it was impossible for us to act differently. It’s not our fault.”

Twitter took the advantage to troll Madrid and their manager, following are some hilarious tweets:

Florentino is wrong: Real Madrid have only themselves to blame for Copa catastrophe https://t.co/YWAzBTPgGP pic.twitter.com/hBp5B64O9e