Located right in the middle of Vietnam and crossed by the perfume river, Hué is one of the most charming destinations and the most visited by tourists from all over the country. Former imperial capital during the Nguyen dynasty, with a citadel that is well worth devoting a few hours and surroundings with much to offer, in this city one can spend a couple of days discovering the set of monuments declared World Heritage. 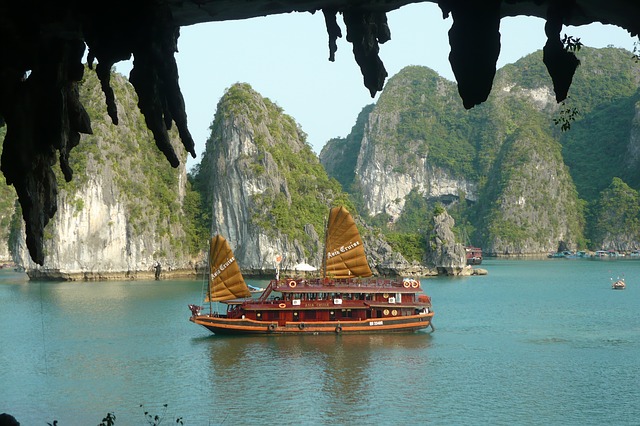 We arrive at the end of the year willing to know all its most emblematic points and incidentally, looking for a place with some atmosphere to spend New Year’s Eve. In the end, it was a whole week that we dedicated to him in which he gave us time to see everything we wanted, to eat a lot and well, to rest from the motorcycle and even to enjoy a party.

What to see in Hue?

Hué was the capital of the Nguyen dynasty, the last royal monarchy in the history of Vietnam. Although the city has suffered greatly in modern times, it retains the rather original face of an ancient eastern city, whose most visible aspect is the complex of royal constructions and traditional monuments built in romantic natural landscapes. The architecture of the ancient capital of Hué deeply reflects the traditional Vietnamese soul. In 1993, the monument complex of Hué was included in the UNESCO World Cultural Heritage list. Since then, Hué, the cultural and tourist center of Vietnam, has become much more attractive not only to national and international visitors but also to historians, architects, and cultural researchers.

How to get around Hué

Hue is a city not too big, so a good option is to visit it on foot or by bicycle. Another of the most typical options in Vietnam is to rent a motorcycle or even a motorcycle with a driver and negotiate a price per day or for a few hours. You can also negotiate a cyclo or a taxi (always demanding that you put the meter) to move around Hué.

How to get to Hue

Getting to Hue is not so difficult. We arrived in Hue at our Km 0 from Dong Ha and took advantage of the fact that we already had a motorcycle to move easily through the city. It is also likely that for you Hué is not the first stop of your trip through Vietnam, so you have several ways to get to this city.

If you come by plane from Hanoi or Ho Chi Minh, there are flights almost every day (depending on the weather) to Phu Bai airport. You also have Da Nana airport a couple of hours away and from there you can take a taxi. You can find deals on flights to Hue from the previous link.

If you move by bus from other cities like Hoi An, there are several companies that operate the routes to get to Hué. You can ask at your hotel, at the bus station, at various agencies or book them online from the 12asia website. We leave you the direct links:

From Hanoi and Ho Chi Minh you can take a night train and from the station, you can walk about 20 minutes or negotiate that you are approached by motorcycle to the area where most of the hotels are.

The Citadel of Hué (Kinh Thanh), located next to the Perfume River, is a small town where the emperor resided. It has a 10km perimeter wall 2m wide surrounded by a 30m wide pit. There are 10 doors to access the enclosure that is accessed by crossing the bridge over the pit. Once inside, we will find various buildings such as the Thai Hoa Palace, lakes and gardens, temples such as To Mieu and Hung Mieu.

Also View: Things to Do in Vietnam

To the southeast of the Citadel, on both banks of the Perfume River, are the imperial tombs of Hué, monuments to the rulers of the Nguyen dynasty, including Minh Mang, Khai Dinh, and Tu Doc. Most were planned by the emperor himself, So each of them reflects the personality of the deceased ruler. In the imperial tombs, you can see courtyards full of stone elephants, horses, and soldiers, as well as pavilions and temples to worship the emperor’s soul.

They say that the Perfume River is named that way because during the fall it is loaded with flowers as it passes through Hué. Legends aside, what is clear is that this river plays a very important role in the city. Taking a walk or taking a tour in one of the traditional boats can be a nice way to relax and see some of the imperial tombs or pagodas such as the Thien Mu Pagoda. Approach one of the docks or agencies in the area and ask, sometimes you can also take a bike on the boat and pedal back to Hué.

Built-in 1601 between a river and a pine forest, next to the Perfume River and 3km from the Citadel, the Thien Mu Pagoda is one of the oldest religious buildings in the country. One of the curiosities of Thien Mu Pagoda is that here lies the car that led the monk Thich Quang Duc when he burned down in 1963 in one of the streets of Saigon. Malcolm Browne’s photo of that monk was Pulitzer Prize in his day and would later be the cover of the Rage Against The Machine album.

This visit is for those who have a little more time and can explore the surroundings. The Thanh Toan Covered Bridge is a pedestrian bridge that is 7 km from Hué. Manufactured in 1776 thanks to the funds granted by Mrs. Tran Thi Dao for its construction, this bridge was of great importance for the villagers of the time since they were able to circumvent the canal to be able to transport all the crops from one side to the other and the merchandise they carried for commerce.

Located west of the Citadel, on the banks of the Perfume River, the temple of the literature of Hué, also called Van Mieu Hue or Van Thanh has dedicated Confucius and was founded by the Nguyen dynasty. The complex consists of about 50 buildings, the largest of all is the Confucius worship room. You can find steles with the names of the candidates who passed the national exams organized by the dynasty. This type of temples in Vietnam reminds us of the importance that knowledge and culture have been in this country for a long time.

One of the five access entrances to the Citadel of Hué, in this case to the west, the Chuong Duc entrance built-in 1804, is one of the most impressive in this imperial city and throughout Southeast Asia. The ornate carvings of its walls in different colors reflect very well the grandeur of the Nguyen dynasty.

The Ngo Mon or Meridian Gate is the main entrance to the Citadel of Hue. It was built in 1833 during the tenure of Emperor Minh Mang in the image and likeness of the Meridian Gate of the Forbidden City of Beijing. The central passage was reserved for the emperor, the 4 entrances on the sides of it were those used by the rest of the mortals. The door consists of a central section and two wings on the sides depicting the traditional entrance towers to palaces, temples, and tombs.

There are still many locations in Hue that are worth a visit. If you are interested, you should now start looking for information about your visa and flights.