A love story of UP with toppings of comedy, highlighting some serious issues sprinkled with some message. What else you need from a cinema?
Badrinath Ki Dulhania has an entirely different plot from ‘Humpty Sharma ki Dulhania’ starring almost same the cast. 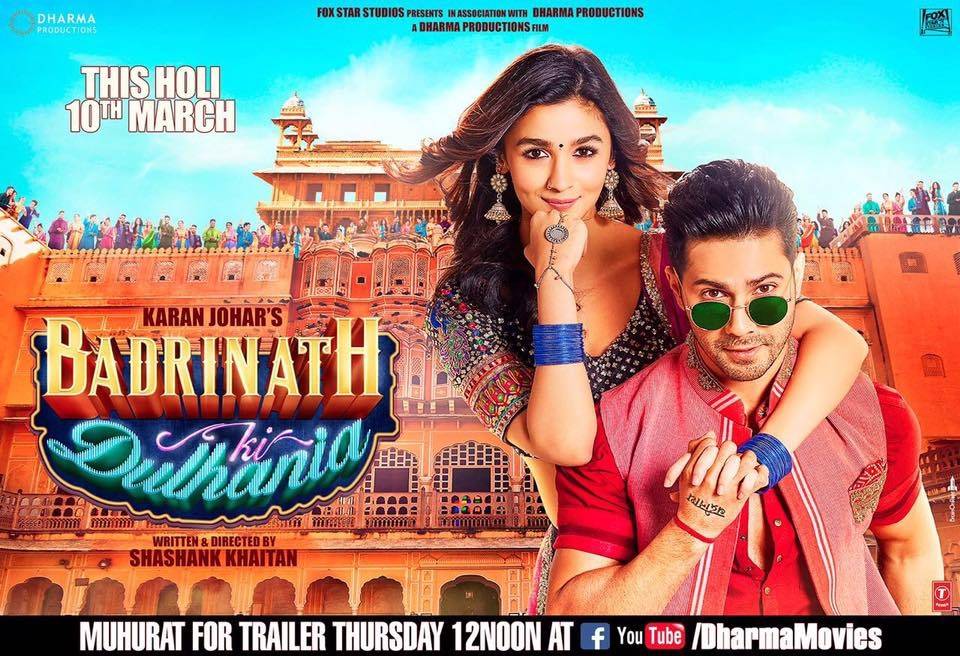 Plot: Badrinath Bansal (Varun), a Jhansi (UP) boy gets attracted to Kota (UP) girl Vedehi Trivedi (Alia). Making a comedy he chases her for days to get married to her but Vedehi is more inclined towards her dreams to fly in airlines as air hostess and has no thought of getting married. She instead wishes her elder sister to get married who has a proposal reject record. To complete their love story, Badri & Vedehi find a partner for her elder sister and both the boys come as a groom to Trivedi house. But that day Vedehi leaves her house to Mumbai to join air hostess training without informing Badri.

Badri now with a broken heart becomes angry and flies Mumbai and then to Singapore to find her as her father wanted revenge. Since he is still in love with her, he tries reasons to be with her. Alia gets convinced that Badri truly loved her but one morning Badri left Singapore without telling. And then later one day the love calls Vedehi back to Jhansi to get married.

Now, this looks a Happy ending common love story, but now. With all these things one of the biggest issues of our country Dowry and dominating females is been highlighted. The mentality of older generations of keeping woman inside the house, not letting them work after marriage, parents not letting girls do what they wish, Dowry played a major role everywhere. How Badri fought his own family and others for this mentality is the major plot of the movie which makes it must watch.

Casting: Alia and Varun have portrayed best for a typical UP couple. Right from the style of dialect to clothing & living, it was in a pure form. No one else could have done better than these two sweet couples. Even the comic timing and punches were just perfect. The supporting cast from Humpty Sharma’s Sahil Vaid was a cherry on the cake with his comedy. Tollywood sensation Shweta Prasad with her overloaded cuteness was an add-on.

Music: BKD has a perfect blend of every genre already trending on chartbusters. 90’s remake ‘Tamma Tamma’ is already been loved. The title track is also funky to hear in your headphones. While soothing one’s Humsafar from Akhil Sachdeva and Roke Na Ruke from Arijeet Singh are some really long drive music. Arijeet Singh needs no words to be defined.

Review: BKD is a perfect blend of comedy, love story, desi Indian touch, social issues and a clear message which makes it a proper entertainer. The movie has a really good pace in the first half which will never bore you at all, while in the second half the pace graph has too many ups & downs. You’ll find yourself inside the movie with many of the situations. A clear message of letting girls and women let aspiring their dreams before and after the marriage has been the main moto drawn. A clear picture about how woman killing their dreams to become a housewife has been shown. They should be given equal opportunities and status in the society as they have their own identity. One should confront their parents even if they possess the same mentality.
This is a perfect family entertainer for you. Every child should take their parents for this movie along with them as a very less of such films are made. You’ll be entertained with comedy punches also with some good message.

Ratings: 4.5 on 5
A perfect family entertainer with perfect music, perfect comic, perfect message, perfect casting is a must watch.