ZEE5 is back with a bang with Resolution Binge January. With plenty of shows coming up, it is guaranteeing full-on entertainment to the viewers. The present article is a compilation of January 2020 launch on ZEE5 of shows in different languages and storylines. Go through the list and find your next watch! 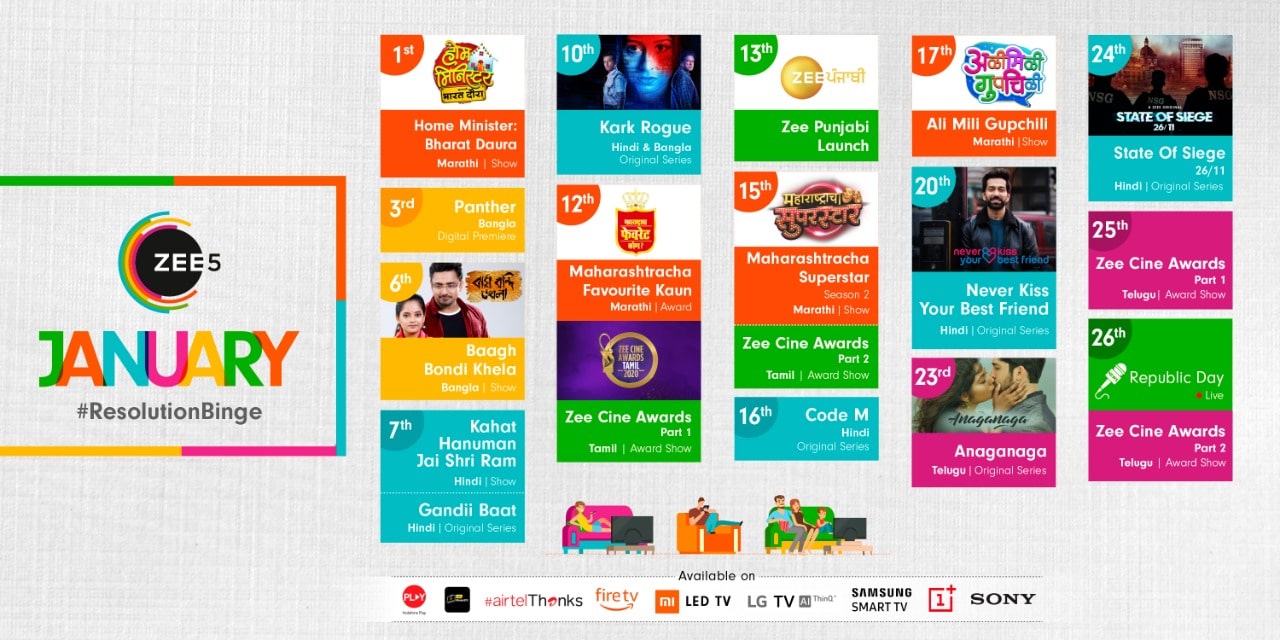 Here are the ZEE5 New Releases January 2020 shows that you cannot miss watching! Go through them

Home Minister: Bharat Daura is a Marathi Show premiering on ZEE5. It is one of the most famous shows of ZEE Marathi. In this show, Aadesh Bandekar is on the path of meeting Maharashtrian Housewives across India. Have you watched this show earlier? Then you will surely love watching it again with a new charm.

If you are a fan of Bangla movies, then you shouldn’t miss adding this movie to your watchlist. The best part of this movie is the storyline where a terrorist group is trying to rescue their leader.

Another gem from ZEE Bangla, Baagh Bandi Khela is a combination of three stories. An Undercover Spy, A Criminal Defence Lawyer, and a Murder Witness! This show will demonstrate the effect of crime on their life.

Yet Another tale from Lord Hanuman’s life, Kahat Hanuman Jai Shri Ram will take you through another mythological journey. You will definitely love watching this show in Hindi!

After 3 successful seasons, Gandii Baat is back again with season 4 in January 2020 Resolution Binge. If you have watched the earlier seasons, then you might be waiting for this one!

Both for Hindi and Bangla Audience, Kark Rogue is a web series revolving around the life of a female forensic surgeon. She finds few similarities in the dead bodies which led her to the discovery of some crime.

Maharashtracha Favourite Kaun is the Annual Event of ZEE Talkies. In this premiere, you will be watching the felicitation of Marathi Cine Superstars. Who according to you will be favorite of Maharashtra?

Maharashtracha Superstar is the hunt for the next Marathi Superstar. In this premiere you will witness young stars, coming from various nooks and corners of Maharashtra and trying their luck to become the next superstar!

Ekta Kapoor is back again with yet another unique story plot. Code M is the story of Monica Mehra, a lawyer in the Indian Army. While she was investigating an encounter case, she came across a conspiracy plot. This entire series will depict the story to you!

Another gem of a Marathi Web Series, Ali Mili Gupchili is a well-known catchphrase. If you are a fan of traditional Marathi shows, this is the ZEE5 New Releases January 2020 you cannot afford to miss!

Story of Nakuul Mehta and Anya Singh, Never Kiss Your Best Friend is the story of queries normal couple generally faces! With this show, you will again face the age-old question, which even you might have faced at some point in life, ‘if a girl and a boy can be friends without falling in love?’

The first Telegu web series to feature on our compilation of January 2020 Resolution Binge. Anaganaga is a compilation of multiple love stories! Interesting enough? You will surely love the concept and the story plot of this romantic drama in Telegu!

All of us remember the attacks of 26/11 on Mumbai. There are a lot many stories said and unsaid about those attacks. The State of Siege is one such story related to the 26/11 attacks on Mumbai. With this series, you will again go deep into those days, when India witnessed the cruelest terrorist attack in the entire history.

Till now, ZEE wasn’t available in the Punjabi Language. However, with the commencement of the year 2020, ZEE is launching ZEE Punjabi for all the Punjabis out there. Hence, now even Punjabis will be able to be the witness January 2020 launch on ZEE5 in their own language.

The annual Awards Saga from ZEE. During January 2020 Resolution Binge, people will be able to view ZEE Cine Awards for two languages, Tamil as well as Telegu. While it will telecast the first part of Tamil Awards. The Telegu Awards premiere will be telecasted into two parts!

Among all these ZEE5 New Releases January 2020, which all ones are on your watch list now? Do comment below!