Bollywood’s famous singer Abhijeet Bhattacharya is known to be blunt in public about others. He has opinions that sometimes bring him ton of hatred, but this time there are people who support him too. On September 21st, Abhijeet, tweeted calling not only Karan Johar but also Mahesh Bhatt and the superstar Khans of Bollywood, as “Dalals”.

Now in wake of Uri attack, Abhijeet is lashing out his anger on the filmmakers for giving a platform for Pakistani artists to showcase their talents in Bollywood. We have seen Pakistani actor Fawad Khan in Karan Johar’s ‘Kapoor and Sons’ and now he is getting ready for another release with Dharma Productions ‘Ae Dil Hai Mushkil’.

Earlier Abhijeet was in a controversy when he abused a female journalist. He also invited a great deal of hatred for himself when he had tweeted: “Kutta rd pe soyega kutte ki maut marega, roads garib ke baap ki nahi hai I ws homles an year nvr slept on rd”. This was in reference to Salman who had killed the poor sleeping on streets while drunk driving.

Before the apology tweet, Abhijeet had also posted online: “Suicide is crime so is sleeping on footpath..80% homeles film ppl strugld achievd stardom but never slept on footpath.”

Abhijeet later  apologized for the same. But is it jealousy or is it nationalism that is making him so frustrated towards the Pakistani artists? 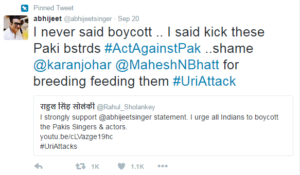 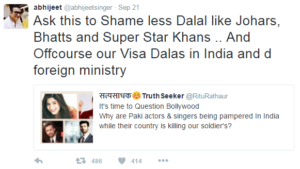 On September 18, 17 soldiers were killed when heavily armed Jaish-e-Mohammad terrorists, who were suspected to have sneaked in from across the Line of Control, attacked an Army Brigade Headquarters in Uri. They threw 17 grenades in 3 minutes. 13–14 army personnel were killed. A gun battle ensued lasting six hours, during which all four militants were killed. An additional 19 – 30 soldiers were reported to have been injured in the attack