Svalbard global seed vault, built in 2008, financed completely by the government of Norway is a seed bank that holds backups of seed samples from world’s crop collection. The vault has the capacity of storing 2.5 billion seeds. The vault currently has 860000 samples approximately. It holds the most diverse collection of seeds. The permafrost and thick rock maintain the temperature at 0 degree Fahrenheit even without electricity which is of utmost importance to preserve the seeds for thousands of years. The vault preserves the crops genetic material that does not allow any crop to extinct. 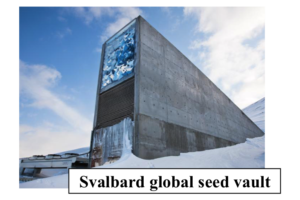 More than 1700 gene banks hold food crops but are exposed to risk, history is a testimony to the fact that gene banks destroy due to natural or manmade disasters. This seed vault is an ultimate insurance for the whole world’s food supply. It is located 390 feet inside a sand stone mountain at Svalbard on Spitsbergen islands, half way between Norway and north-pole. Spitsbergen lacks tectonic activities making it earthquake proof and also lies 130 mt above sea level preventing it from any kind of flood ruins.

Many critics questioned the usefulness of the vault, but the first withdrawal of seed after the Syria civil war in 2015 proves the necessity of a vault of this kind. The vault is of great importance to developing countries as food security is a major challenge to most of the developing countries. Storage with this vault ensures that these developing countries do not lose their unique diversity due to any catastrophic accident.

The vault accepts seeds that are shared under the multilateral system of international treaty of seeds. The seeds are accepted under a black box system that ensures the ownership of the seeds with the depositor. The Norway government has no authority over the seeds, only the depositors can withdraw the seeds deposited therefore leaving no scope for any country to lose its biodiversity.

The vault has been awarded as 6th best on times best invention in 2008. The vault is sure to succeed in preventing and preserving the wide variety of plant seeds and also the generations after generations will not face the unavailability of food crops.