It has become sort of a trend to travel and go on long journeys across cities and see the world. We can see the recent trend of travelling to Leh-Ladakh, especially among the youth. Many of us have been there; surely it’s an adventurous trip. Before, it was only appealing to the men. But times have changed and women are showing their rough and tough side too. Ladakh is a region in J&K state. There have been all women’s trip to Leh-Ladakh too.

We have here five people, Jaimeen Baxi, Rudrani Singh (Yes! A girl riding a bike on the foothills of Himalayan) and Kapil Taneja on their bikes and Sakshi Chand and Nitesh Sharma in a car, who traveled not to Ladakh, but to the Spiti Valley. Their journey of fourteen days at and around the Spiti Valley was a life changing experience. It’s when you are out there, you not only feel the beauty of the place around you but also find out your inner strengths. You challenge yourself to do the things you’ve never done before and you move forward because you want to reach your destination, is what these five friends thought. Three (Jaimeen, Kapil and Rudrani) of which were on their bikes and other two (Sakshi and Nitesh) in a car.

The Spiti Valley is a desert mountain valley located high in the Himalayan mountains in the north-eastern part of the Indian state of Himachal Pradesh. The name “Spiti” means “The Middle Land”, i.e. the land between Tibet and India.

Travelled for more than 800 kms from Noida to Narkanda, these people journeyed on their own with a route map to keep the path correct. These people chose to get into a much bigger adventure by journeying on their Royal Enfields by themselves, instead of booking tickets with a tourism company, knowing nothing that’s going to come ahead of them.

The first halt was at the foot of the Spiti Valley, a place called Narkanda where they found accommodation after about half an hour of search. As adventurous as they were, they did not book any accommodations in advance. This was their first and the longest they rode in the entire trip. 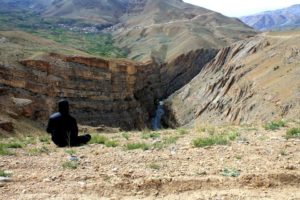 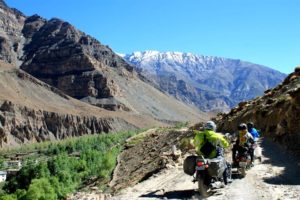 These guys did not need to participate in roadies in order to meet strangers and embark an adventurous journey together. Rather they chose to create one on their own. The ones in the car and the ones riding the bike did not know each other before the trip had began, it was meeting of strangers who shared the same vision of this crazy journey.

People there are friendly and trust worthy. Most of us do not trust a stranger if they asked for a ride, even if we were going around our city. In the town of Chitkul, it’s perfectly normal to offer a ride/lift to someone who’s walking by. And the kids there are just lovely, they put out their hands to give a fly-five (more like high-fly)! This is true innocence and warmth of people in the world, isn’t it?

Entering the Nako roads, there are board signs everywhere that has ‘BRO’ written on them, which for us slang lovers will only mean one thing. But what the sign actually means is Boarder Road Organization. The road from Chitkul to Nako has an uneven path. One needs to remain calm in times like these.

# SPENDING A NIGHT AT KAZA 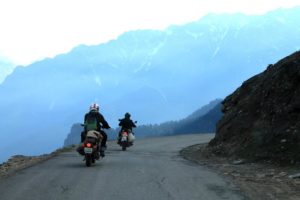 This place has beautiful Israeli restaurants and shops where you can purchase small gifts for your family. If you’re planning on a bonfire at night, it’s best that you collect pieces of wood on your way, because it’s easier! The Tabo Monastery and Kee Monastery are spiritual places you can visit. Hikkim is the place which has the world’s highest post office  and it’s fascinating to visit such a place! 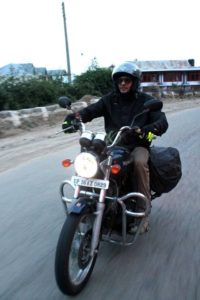 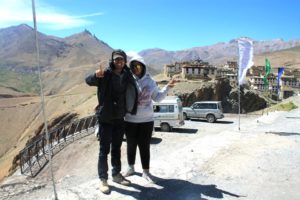 This was not a long journey compared to the long and tiring rides these guys had made already. Although they had to cross some ice cold water streams along the way, these guys were well geared for the same. The flow of water was strong and could be dangerous, but these people eventually made it through on their bikes, while others were crossing the path in cars (which seemed safer than bikes, of course). 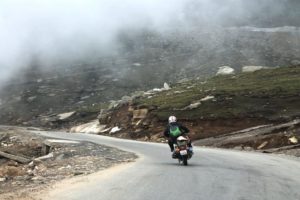 You will find melted rivers on paths of this route during the day and ice glaciers during the bad weather. Running waters is a problem for riders and hence bad weather is a better experience as one can ride without trouble of getting pushed by the force of water. One helpful tip from the riders we got is that to carry plastic bags with you, because getting in contact with the icy waters is no good for you body. These people thought they’d have to ampute their legs, but fortunately none of that happened. Cover you legs with plastic bags-socks-plastic bag-shoes. 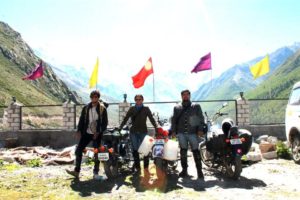 This is what Jaimeen had to say, “The beautiful landscape breeze was now covered by muffled sounds of children screaming and cars honking. The road however was a living proof of ecstasy that one can feel when the tires come in contact with some good old Asphalt. Treading on dirt, gravel and mud all three of which are poor grippers; the Asphalt road felt like it would take us straight to heaven. Being the most commercial city in Himachal Pradesh Manali had nothing promising to offer. The whole sanctity that we created merging with surroundings around us for a week was immediately wiped off in less than a couple of hours. Coming to Manali was like coming to civilization and all of us took our own time to realize that true pleasures come where tourists don’t”. 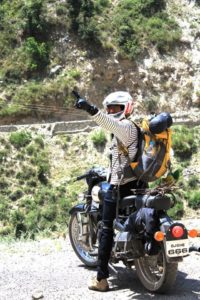 The day had come when the riders were looking forward to leave for home, but an event occurred which changed their perspective towards people (Or rather, policemen). One of the riders’ bike got stolen from the hotel parking lot. They couldn’t find the location of the bike anywhere near the hotel and hence tried to find the thief through the CCTV footage of the hotel. After a long search, they found out a drunk thief (who couldn’t even ride the bike without falling) had stolen the bike.

Later all of them went to the local police station for complaint. The police assured them that the bike couldn’t have gone far. The on duty officer asked them to come along with them to search their bike. He made a few phone calls to his informants to search for the bike and he himself spend his time and money (fuel) to search for the bike. After some hours of hunting, they found their bike near a temple in Manali.

This is what the rider had to say about this experience, ” My whole identity of a police man that I had formed through all these years of negative experiences washed away in minutes. He could have easily asked me to come the next day or wait for a few days and I would have agreed, but what he chose to do rather… was not only truthful but also heroic. Finding the bike was not even the best part. I tried talking to the police constable thanking him for his effort. In my best possible suggestive way I asked him, “Sir, if there are any fees for this investigation please let me do the needful as I cannot be more thankful” which was my best possible effort to reward him for his services. What he said in reply was more shocking than me finding my bike. “Mai duty pein hoon aur hum duty pe paise nahi lete. Aapki bike chori hui, humne dhoond li bas yehi hamara kaam hai”.