by Gaurav Moorjani 6 years ago6 years ago
6.1kviews
82

The Linux penguin hoots from the CRT monitor displaying the first home page of google. Brisking on its side is a server made of Lego bricks. Google Retrospects its early days.
But the deep rooted question remains is September 27th Googles real birthday. 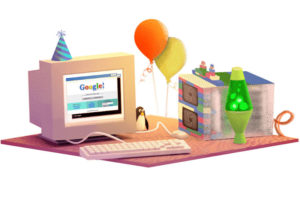 Though it does it not relate with the actual date of the company’s foundation, in the many past few years google have always changed their birthday dates and this one is a recent example. Till 2005 Google celebrated its birthday on 7th September as it was incorporated that time.

Then it changed to 27th September as the number of record number of search pages it was indexing that time. The google domain was registered on 15th September 1997.

Can we really come to know the real birthday of google ?

On  its 16th Birthday Google posted an animated doodle on its homepage. It showed Six Letters each playing as different characters where the G is celebrating and the o is happy and excited as 16 years have completed. Small l is hanging with the other o and celebrating. 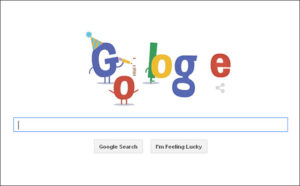 During its 15th birthday google it posted an interactive session of pinata, a famous Mexican birthday game.

In 2011, when Google Turned 13, it doodled itself for a photograph which shows the celebrations.There was a cake on the table and 13 candles on it, Google logo sat around a table with party hats along with gifts and presents covering rest of the table to light up the mood. 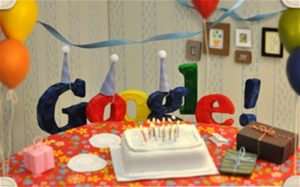