A massive fire has broke out in Bandra at Mahanagar Telephone Nigam Limited (MTNL) building, Around 100 people are feared trapped on the terrace of the building balcony, Sources have said.

Around 14 fire engines and other equipments including an ambulance and robot van has arrived at the place and is engaged in rescuing people and fighting fire at the same time. A big relief is that no Casualties or injuries have been reported till now. The officials have declared it as a Level 4 fire. 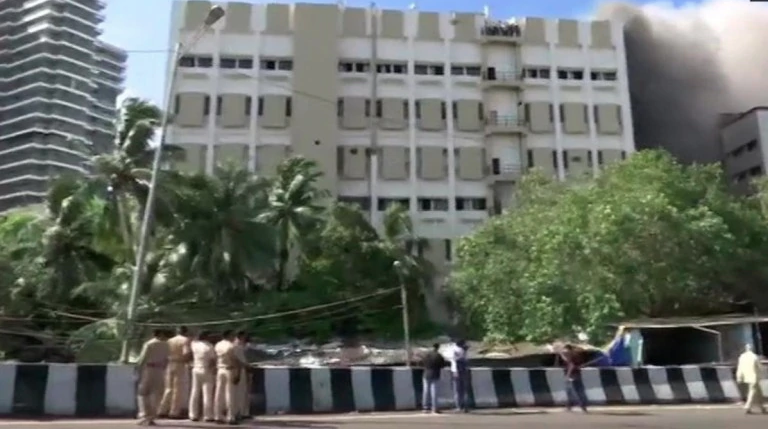 Officials are trying to rescue people via cranes in a batch of five to six people at a time. Visuals show that people are afraid in the building and are screaming for help as smoke is spreading quickly in the building.

#WATCH Mumbai: A level 4 fire has broken out in MTNL Building in Bandra, 14 fire tenders are present at the spot. Fire fighting operations are underway. Approximately 100 people are reportedly trapped on the terrace of the building. More details awaited. pic.twitter.com/CVCAP8Tjj2

The MTNL building is located near a fire brigade centre in Bandra so the fire fighters quickly reached the spot. The fire broke at around 3PM. The MTNL building is of 9th and is confined mainly to 3rd and 4th floor. Today is the first working day of the week so mostly all the MTNL employees were present inside the building

Mumbai: People trapped in MTNL (Mahanagar Telephone Nigam Limited) building in Bandra, are being evacuated. A level 4 fire has broken in the building, 14 fire tenders are present at the spot. pic.twitter.com/v5M3lfRWVd

The story that we have shared is still in developing phase, we will share more details once we get to know more about it.