Chines phones are invading the world with it’s low price and high specs. If you use a Chinese phone then you would be surprised to know how well they work with a very fast speed at a very cheap rate. Do you think Chinese manufacturers are giving these phones for charity at such a low rate  ? checkout why are Chinese phones cheaper.

One of the most common reason why Chinese phones are cheaper is because of easy availability of labourers at low cost. China has lowest labor costs in the world and this is the main reason why a lot of manufacturers build products there.

2) High-tech but not revolutionary

One main factor is that Chines manufacturers don’t do packing of phones with greatest and very latest hardware. They are more focused on balancing the balancing price with performance. If you notice a website selling Chinese phones then you will see smartphones with reasonably high-end specs, but cost a lot less than a Samsung Galaxy S7. Samsung basically uses high quality parts are quite expensive in the market.

A lot of Chinese manufacturers use Mediatek processor, these processors are not upto mark as samsung’s Exynos units and are very cheap in price. Cherry on the cake is that Mediatek is a Chinese company so local distributors get all products at very less price.

Chinese manufacturers done don’t use the latest DDR4 RAM and instead use DDR3 modules.  Chinese phones have Japanese or Korean display which is very cheap and of low quality as compared to AMOLED or IPS panels. 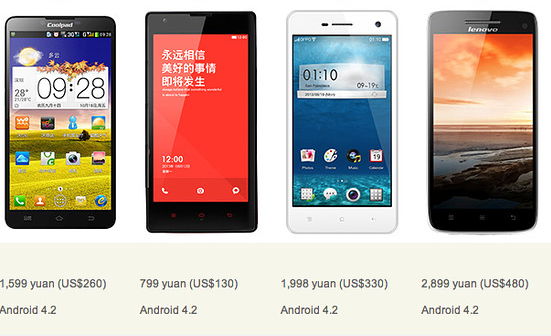 Chinese manufacturers prefer selling products on e-commerce as it is the booming technology. Companies like Samsung and Apple have spent it’s fortune in building their own stores. So basically when you are buying a Samsung or Apple phone you are not only paying to the company but its distribution and it the cost of running and maintaining the store.  Chinese phones are cheaper as it is not of one specific brand and does not have a physical store.

Did you see how the announcement of launch of Samsung galaxy s6 was made ? Did you see Xperia Z5 was promoted in a new James Bond film ? All these companies spend a fortune into advertisment.

Instead of spending a lot of money in marketing, Chinese manufacturers promote their phones on social media which is really very cheap as compared to Samsung and Sony.

The best sale method that works in china is creating the demand for product. It is mentality of people that if a certain product will run of sale, they’re more likely to rush to buy. Xiaomi Mi4 is a China made phone and it was exhausted in just 37 seconds on Flipkart.

6) All this is fine, but does product quality suffer?

Out in the market we find a lot of better phones than these Chinese phones but Chinese devices are perfectly adequate for messaging, web browsing and various media consumption. There are negative factors about Chinese phones as well, Some Chinese android device never see an Android update and Android skins are sometimes horrible.

If you are a android user and don’t want to spend much on smartphone then you should give a look at chinese phones.