by Rohan Pandya 5 years ago5 years ago
2kviews
77

It is end of an Era for indian cricket team as Tendulkar, Dravid, Ganguly, Laxman have already retired from international cricket and now Virender Sehwag has announced his retirement. This news has shocked all cricket lovers around the globe about retirement announcement of this legendary indian opening batsman.

If the reports are to be believed, Sehwag has denied about any such retirement rumours and said it is very baseless. He added that he has only hinted about retirement to take part in Masters Champions League (MCL) A tournament based in UAE. Only retired players can play this tournament, Brian Lara, Azhar Mahmood and Graeme Smith were present in at the launch of MCL along side Sehwag. Sehwag said he can only play this tournament if he is retired, so he will announce his retirement after returning to india. 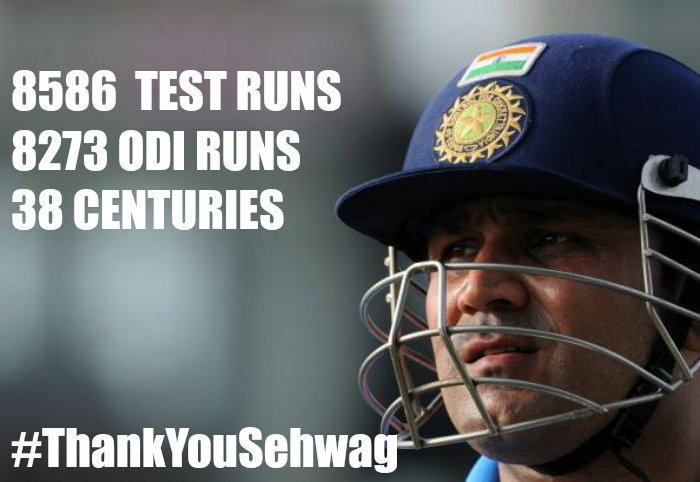 Today we have a list of epic moments produced by Virender Sehwag for team india in his career.

July 25, 2002: Sourav Ganguly changed Sehwag’s destiny when he was told to move up the order to play against England. It was the legendary match at Lords stadium where Ganguly’s took off his shirt from the balcony. Sehwag scored scored 84 runs from 96 balls for the opening wicket.

March 28, 2004: Sehwag scored an amazing 309 in the 1st Multan test where he broke VVS Laxman’s record for the highest test score ever made by an Indian. Sehwag did it in style informing Sachin “that whether it was fast, slow or whatever, I would step out and hit Saqlain Mushtaq for a six.” and Bang it was a six !!!

March 29, 2008: Sehwag scored the fastest triple century (300 runs from 278 balls) against South Africa when india had to chase 540 runs in a test match held at chennai.

July 31, 2008: Sehwag scored first double ton (201) against the Sri Lankans in a high pressured game where Ajanta Mendis and Muralitharan took wickets of all top batsman leaving only Sehwag and tail-enders to finish the game.

December 15, 2008: After the 26/11 Mumbai attacks the entire nation was in shock and india chase 387 runs to beat England where Sehwag scored runs in around 20 overs.  Virender Sehwag said in an interview at the end of match “After the terror attacks in Mumbai we wanted to give a message to the whole of India: don’t worry, keep cheering and as long as we are together we can tackle anything,”

December 6, 2009: After scoring two triple century, Sehwag missed on scoring third triple ton after he scored 293 of 254 balls where he was caught and bowled by the injured Muttiah Muralitharan.