Chris Gayle needed just 12 balls to score a fifty against the Adelaide Strikers and now has equalled Yuvraj Sing’s record of the fastest 50 runs in a T-20 game. 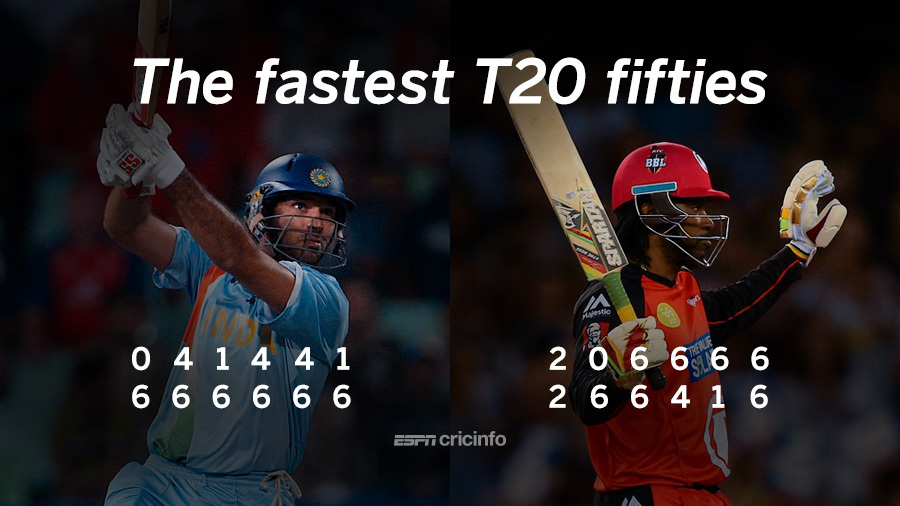 0.1 West to Gayle, 2 runs, full and straight on middle, tucked to deep midwicket for a couple.Gayle 2 (1)

0.3 West to Gayle, SIX, huge six from Gayle. Slightly short on off, Gayle lays into the pull and sends it whistling deep into the stands over midwicket. What a massive hit that is Gayle 8 (3)

0.4 West to Gayle, SIX, second tier now. Even bigger than the previous one. Shortish delivery on middle, Gayle pummels the pull again. Thwack into the stands. Gayle 14 (4)

0.5 West to Gayle, SIX, three in three. Poor ball though and all Gayle needed to do was pick it off his hips into the stands over backward square leg. Yikes, what a start this has been Gayle 20 (5)

0.6 West to Gayle, SIX, oh my. That is power. That is timing. Low full toss on middle and Gayle just muscles a lofted drive over long-on. Clears the boundary with enviable ease. Gayle 26 (6)

1.6 Neser to Gayle, 2 runs, too short, he rocks back and muscles that one towards the long boundary at deep midwicket, didn’t entirely get hold of it, fortunately for Gayle, lands in the big gap between deep square and deep midwicket Gayle 28 (7)

2.2 Laughlin to Gayle, (no ball) SIX, full toss outside off, enough room for him to swing freely and deposit that over wide long-off. Height in question, umpire signals free-hit. What carnage here and we’re not even three overs into the chase. Put your helmets on in the crowd, pleaseGayle 34 (8)

2.2 Laughlin to Gayle, SIX, that has been hit into Canberra, I think! Too short again, clears his front leg and pulls that imperiously over deep midwicket. Some 40 rows back. Nearly into the second tier. You can’t drag it short. Doesn’t matter how many men are patrolling the boundary, he’s hitting them way over. Gayle 40 (9)

2.3 Laughlin to Gayle, FOUR, low full toss outside off, this one’s been hit flat and hard wide of mid-off. What does the bowler do now? Gayle 44 (10)

2.4 Laughlin to Gayle, 1 run, excellent yorker this time, jams his bat down in time to squeeze it towards midwicket Gayle 45 (11)

3.1 Head to Gayle, SIX, And he equals Yuvraj’s record for the fastest T20 fifty in some style. Tossed up, his eyes lit up as he saw the flight, swung through the line and cleared the ropes at long-on. Gayle 51 (12)