In this world of so called *originality*, WhatsApp has released one of the biggest updates (Really?) today replacing ‘Status’ with ‘Stories’. This feature will let you add photos, videos & gifs which will automatically disappear after 24 hours. I guess we have heard this somewhere before, right? Haha. This is just again a copy of the original idea from Stanford Graduates of app ‘Snapchat’.

Earlier, Facebook-owned Instagram introduced this feature but later added some own elements which made it little unique as of now. Next, Facebook-owned messenger tried to bring a similar thing. And now, Facebook-owned WhatsApp with 1.2 Billion active users added ‘WhatsApp stories’ in their app. 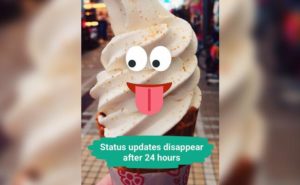 #1: Yet another place to Post stories– Posting on Snapchat, downloading and posting on Instagram friends was itself a task. And now WhatsApp will eat up more of our mobile’s data.

#2: Existence in Family- You used to love Instagram & Snapchat because your family wasn’t still using those apps. And uploading stories after being high used to be a dope amongst friends. But WhatsApp includes all your Family-Relatives-Boss-Maid-Plumber-Electrician-Chacha ke tau ke Chachere Bete ki Mausi ka beta also.

#3: Demo Sessions to your MOM- Since your Mom’s phone also got the update, you have to explain everything about ‘STORIES’. To which she will definitely enquire, “You pee-ed in your pants 20 years back, Can we update that also”? Moms are Moms! -.-

#4: Shortage of Phone memory: Saving stories will definitely eat up lots and lots of your phone memory making the app bulkier in size just like Snapchat. And you cannot remove WhatsApp from your phone so ultimately you will have to clean-up your phone again and again if you have less free storage.

#5: We miss Status: Removing ‘Status’ which was unique in its own way. Updating a love Quote status for your beloved or angry quote if you had a fight is no more possible. Now how will boys get to know their babu-baby is angry from them. LOL
Well, today it’s all about options we own. It’s ultimately choice of a user to spend time on which platform for what feature. But this move wasn’t expected from Internet King Mark Zuckerberg. You spoilt the only private platform we had, why? Why are you so obsessed with SNAPCHAT?

I would be hardly using this feature on WhatsApp; Snapchat still has its own creative face filter which still makes it unique. We Love you Snapchat. <3