Virat Kohli the captain of Royal Challengers Bangalore is the man with guts who looks to lead by example. He proved it once again yesterday by scoring 75 runs in just 51 balls against KKR and saved RCB from getting knocked out of IPL.

Virat Kohli had got a split on his left hand while fielding. Kohli scored 75 runs with a broken hand which had 7-8 stitches on it.  When asked kohli about his performance in the match he said “It did not matter if he played with 10 stitches, as long as the team won.” 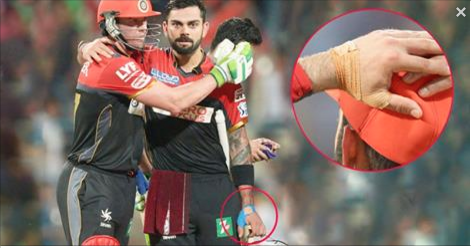 This proves how much dedicated Kohli is to the game and his team. Virat Kohli is the highest runs scorer with 752 runs in single edition of IPL.

Checkout the below video which show in details that instead of stitches Virat Kohli played the match against KKR and won it for his team …Kohli is a true match winner.