A young life has been cut short. Balika Vadhu actress Pratyusha Banerjee who played Anandi in the serial has reportedly committed suicide. As per a news report Pratyusha Banerjee hung herself in an attempt to suicide earlier in the day. The actress later passed away in Kokilaben Ambani Hospital in Andheri.

Balika Vadhu Actress Pratyusha Banerjee Is No More With Us

The reason behind taking this drastic step is said to be her issues in personal life. She was very depressed because of the fact that things were not working out properly with her boyfriend Rahul Raj Singh. The couple were in a serious relation and were planning to tie the knots by 2016 end.

Hospital authorities did not comment about this matter and they could not leak any information. Sidharth Shukla her Balika Vadhu colleague said he was shocked and he heard this news just now only, he further added “This is indeed very sad and depressing”.

Pratyusha Banerjee was very popular on T.V because of her role in Balika Vadhu. She later shifted to reality shows and participated in Big Boss 7. She was last seen in Sasural Simar Ka where she played a daayan. Since past few months thing were not going in her favour. She accused 8 men of posing as cops and molesting her. Moreover after her birthday party Pratyusha and her boyfriend faced flak for non-payment of dues at a plush suburban venue.

We have got our hands on Pratyusha Whatsapp account and her status which was updated on 15th march hints that she was on a emotional breakdown. 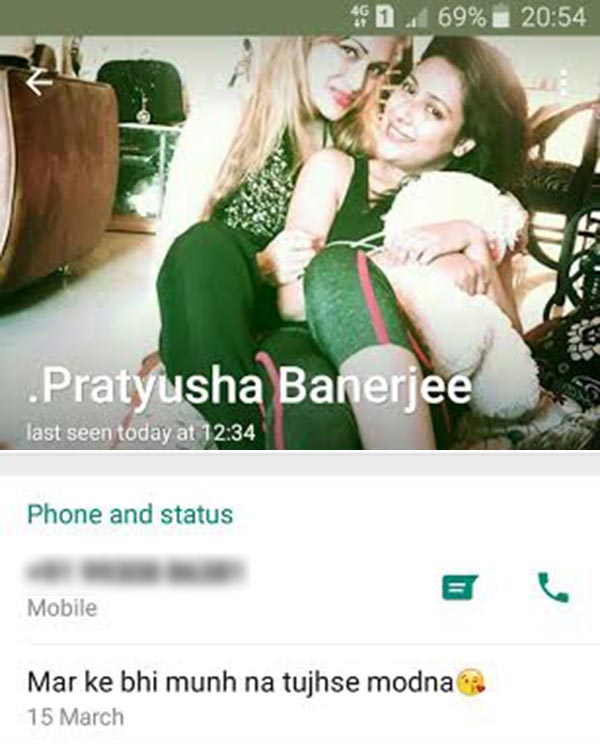