Maybe you’ve been to vacation rentals in Charlotte a few times before and you’ve seen all of the usual sights, so you’re looking for something a little more “outside of the box?”

If you’re keen to be creative with your adventures in Charlotte, there are many strange, creative, quirky and fascinating attractions to discover in this city. Here are a few of the out of the ordinary things to do in Queen City. 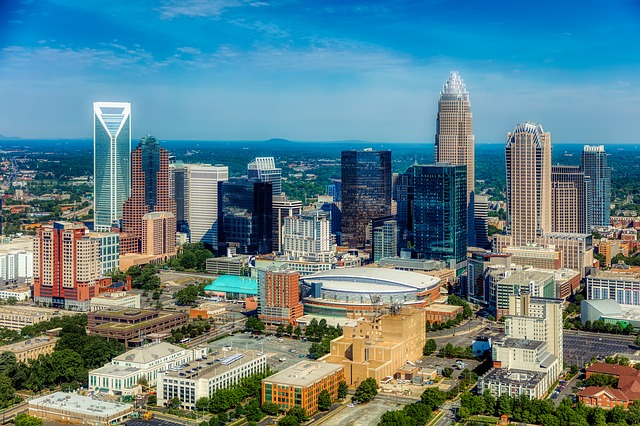 The BB&T Ballpark has some pretty excellent views. While you watch the game, you can look out over the picturesque Charlotte skyline. But you might also spot something strange – a huge 18 foot tall animatronic dragon peeked over the wall in center field.

This delightfully kitsch sculpture is a big part of Charlotte Knights baseball games. Every time the team scores a home run, he opens his mouth to roar and breathe smoke. Some say its tacky, but it’s certainly something unique and strange to check out while in Charlotte.

Visit the Firebird, aka. The “Disco Chicken”

Officially unveiled in 2009, the “Disco Chicken” is the nickname for a famous sculpture called “The Firebird’ in downtown Charlotte. It was created in 1991 by French-American artist Niki de Saint Phalle and it stands in front of Charlotte’s Bechtler Museum of Modern Art.

The 18 foot tall sculpture is covered in mosaic mirror tiles and shimmers in the sunshine like a disco ball. It is supposed to depict a bird sitting on an arch, but the arch looks more like bell-bottom pants – hence the name Disco Chicken.

Do A City Scavenger Hunt

Local travel company 3Quest Challenge hosts scavenger hunts that will have you searching all over Uptown Charlotte for hints and clues that you will put together to solve a larger puzzle. Once you have completed all the quests and found the clues, the first team to complete the larger puzzle wins!

This is a really fun way to explore the city and see different corners of it that you might not discover on your own.

This one isn’t exactly in Charlotte, but it’s not far away. Benny has a passion for welding unique items together into Yard Art and his outdoor showcase is nothing short of spectacular.

At this unique and quirky spot you’ll find everything from robots to airplanes to a dinosaur made from shopping carts (that breathes fire!) and Despicable Me minions made from propane tanks. It’s a unique showcase of artistry and creativity. (You can see some photos here.)

When you press on the colorful panels along the exterior of 7th Street Parking Garage, they will light up and make noises. But that’s not all. If you look closer, you’ll notice that there’s a plaque on the building with a riddle. This is an installation piece by American architect and sound artist Christopher Janney, called “Touch My Building”.

If you can figure out the riddle and push the panels in the right order, you’ll awaken the ‘ghost’ hidden within the wall. The panels will light up and the building will sing a song. It’s a pretty strange and delightful piece of interactive public art.

The name doesn’t sound that appetizing, but livermush has a long tradition in North Carolina. It is a savory sliced loaf, made from scrap meat, pork liver, cornmeal and spices. It was brought to the USA in the 1700s by German immigrants. Many people here grew up frying it for breakfast, eating it with grits and eggs.

As well as being an important part of the history of the South, livermush is a great way to practice “nose to tail” eating. In other words, it is a tasty way of using up scrap meat and not letting any parts of an animal go to waste. One of the best places to give this dish a try is at Brooks Sandwich House, in Charlotte’s art district of NoDA.

When you drive past Puckett’s Farm Equipment, it looks from the outside like a brick warehouse where you might pick up a milking bucket or a backhoe. However, step inside and you’ll find that it’s actually a pub hosting live music. Ever since the farm equipment business died down, it became a 21st Century Honky-Tonk featuring bluegrass, country and rock.

This odd and wonderful concert venue has a lot of character and is decorated with some pretty unique features. For example, the tip jar onstage for the band is a prosthetic leg.

Go off the beaten track on your next visit to Charlotte.

These are just a few of the fun, unique and quirky things you can do on your visit to Queen City.

We are unfortunately limited to only 2 links per article so I had to remove some of them. Our target link and one that also has any relevance to the location, topic is good. 😉