We, humans, believe that most clothes are specific for genders. As per our society, some things are fitting for a man to wear while others are for women. Many of us think that skirts and heels are only for women. However, there are some people who like to wear whatever they like. They express themselves openly and they don’t follow the stereotype clothing rules set by our community. The same is the case with Mark Bryan, who feels it is finally time that we get rid of gender stereotypes, at least in the case of clothing.

Mark who is an American, lives currently in Germany. He is a robotic engineer by his profession. He is a normal person like every one of us and lives his life like most people. However, he tries his best to break gender stereotypes every other day. Mark wears a skirt and a heel almost every time, including when he goes to work, to the town, and while at home as well. Well, he is doing it for a long time now, and here’s how he looks. 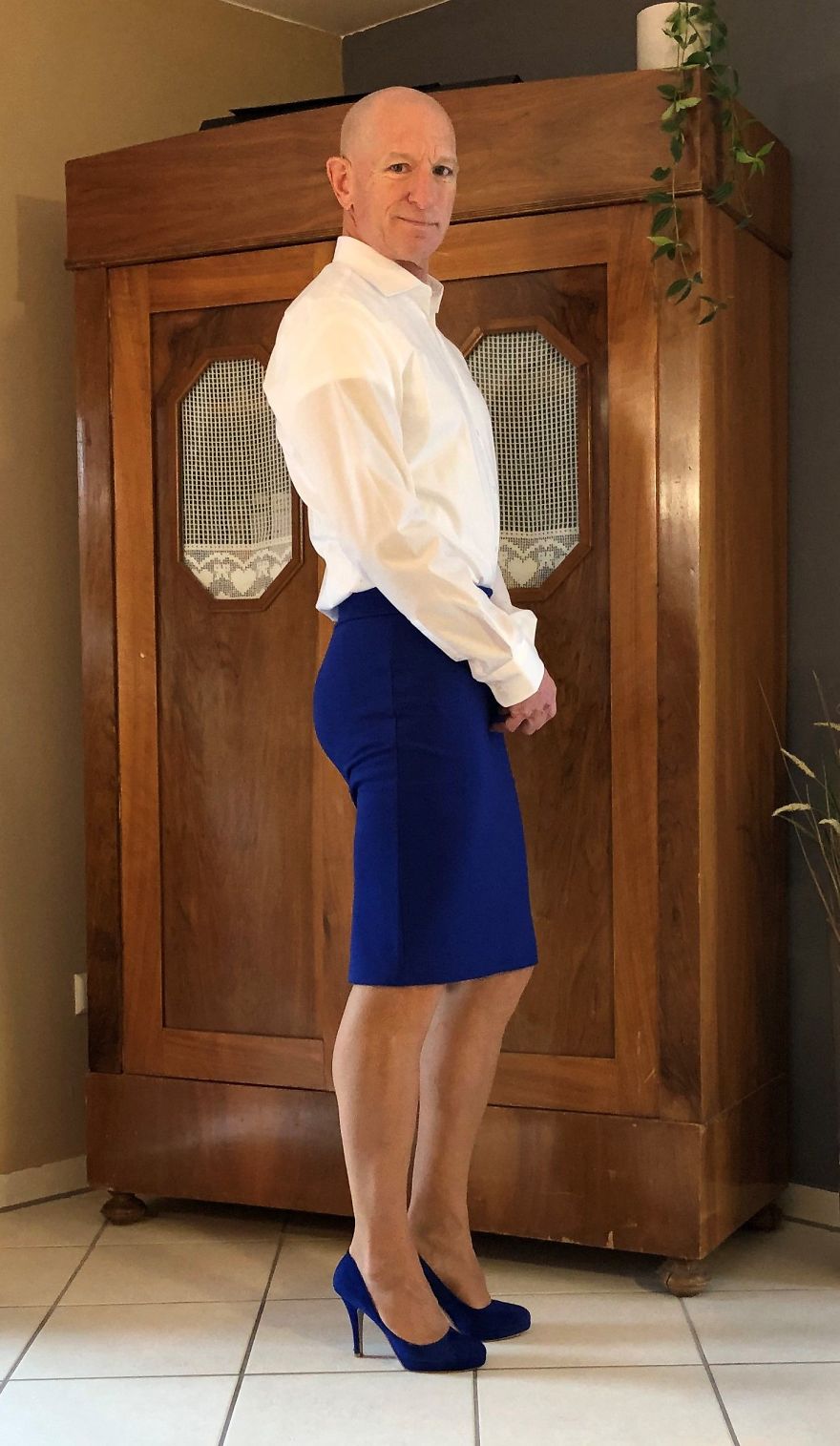 Here’s what he said to an online portal,

I dress like this because I can. Just to be different. I have always admired the women that wore tight skirts and heels. Not sexually, but the power they presented. I don’t dress to be sexual, but to dress like any professional woman would. To me, clothes have no gender. I prefer skirts to dresses. Dresses don’t allow me to mix the genders. I prefer a ‘masculine’ look above the waist and a non-gendered look below the waist. It’s all about clothes having no gender. 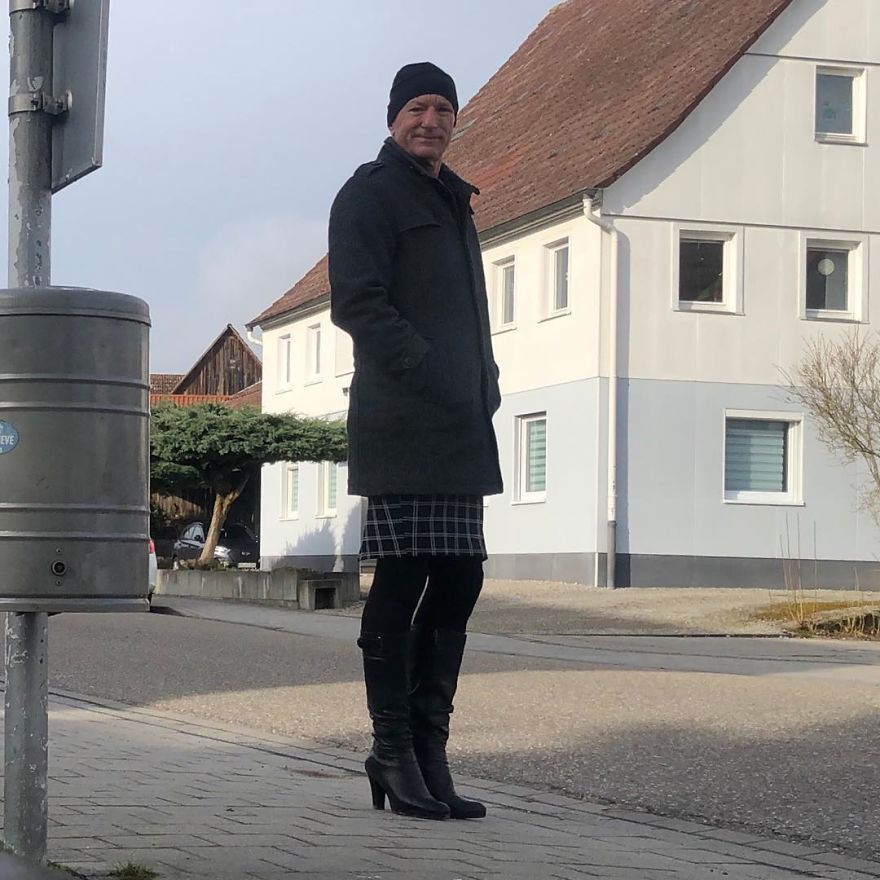 Mark is happily married for over 11 years and also has a daughter. He gets full support from his wife and family. “My wife often makes suggestions on what I should wear. My daughter wishes she could borrow my shoes at times” – said, Mark. 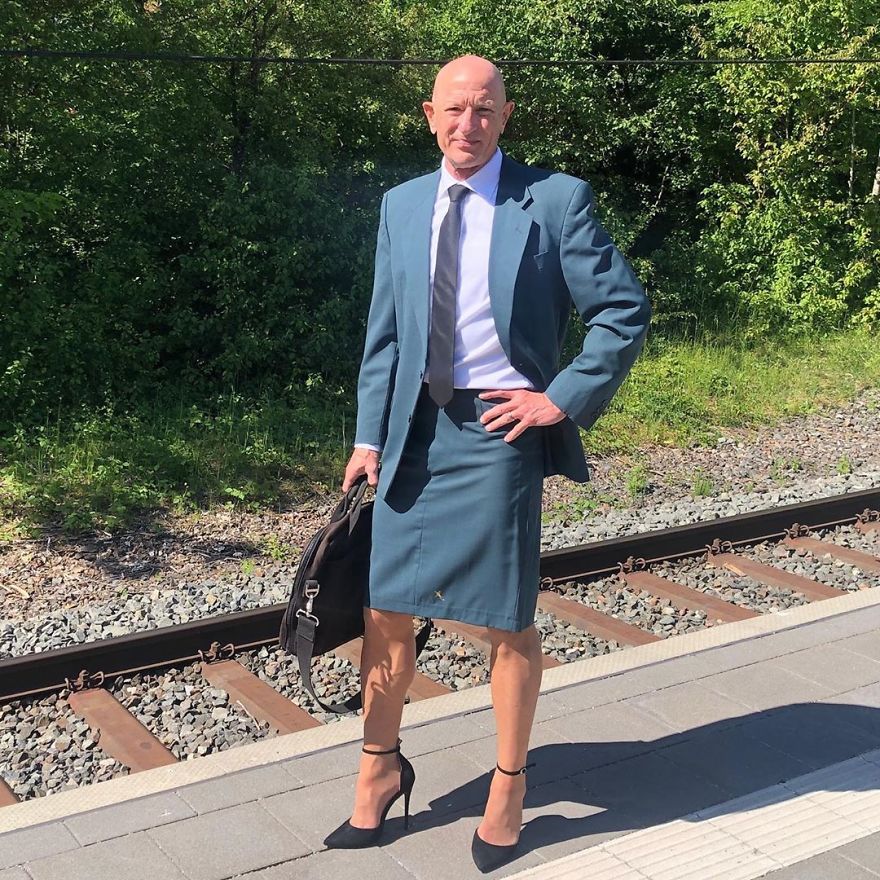 He further added, “I wear almost exclusively pencil skirts and stiletto heels. I don’t wear dresses as that is not my style, which is presenting as the man above the waist, with non-gendered clothing below the waist. I prefer my skirts at the knee plus or minus an inch or two. My average heel height for a week is around 4 inches.” 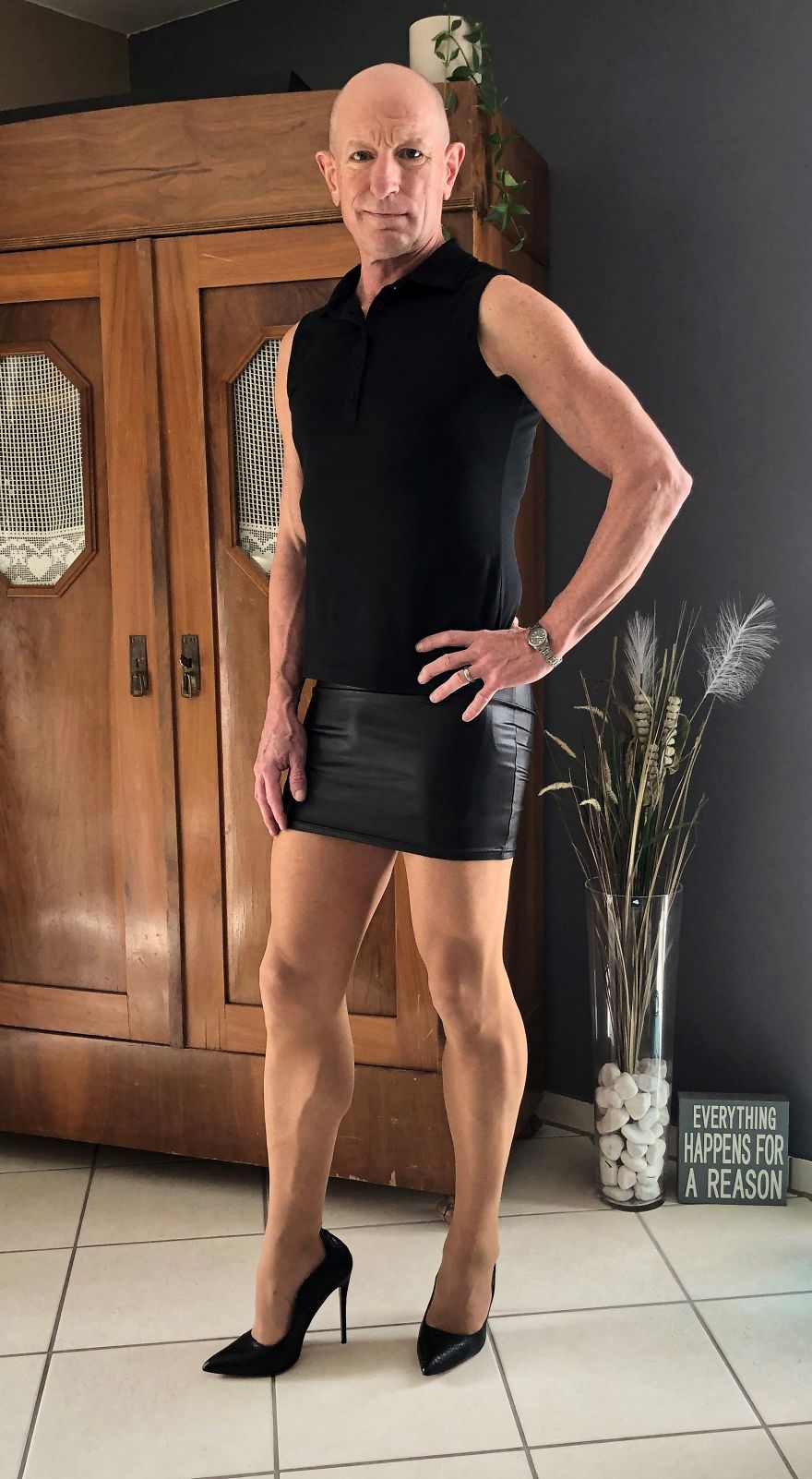 Upon asking how people react to his dressing style he said that women who are usually between the age of 30 to 40 give him compliments. Whereas, men do ask questions and make comments but generally will not compliment him.

“Take a person with bright green hair. Green hair is not normal. You look up and see this person, your mind tells you it’s a person with green hair, you think to yourself, that’s odd or interesting, then you go back to do what you were doing and don’t give it another thought. I believe this is the same when people see me in a skirt and heels.” 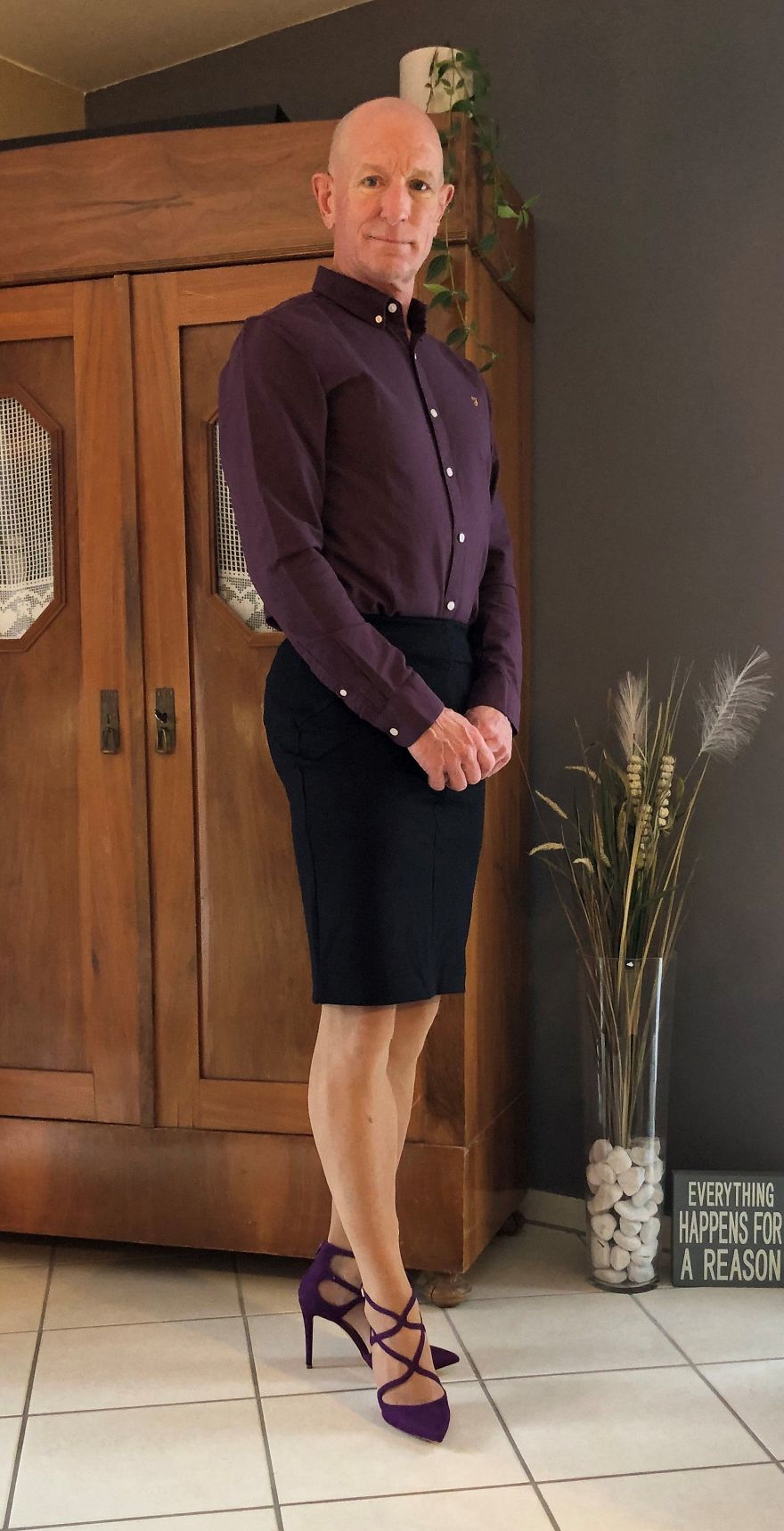 “I am old enough to remember that in school, the girls could not wear pants. Pants have now become a non-gendered article of clothing. So why can’t skirts and heels be non-gendered? Besides, men wore heels before women did. Maybe not today’s stiletto-style heels, but men did wear heels before women.” 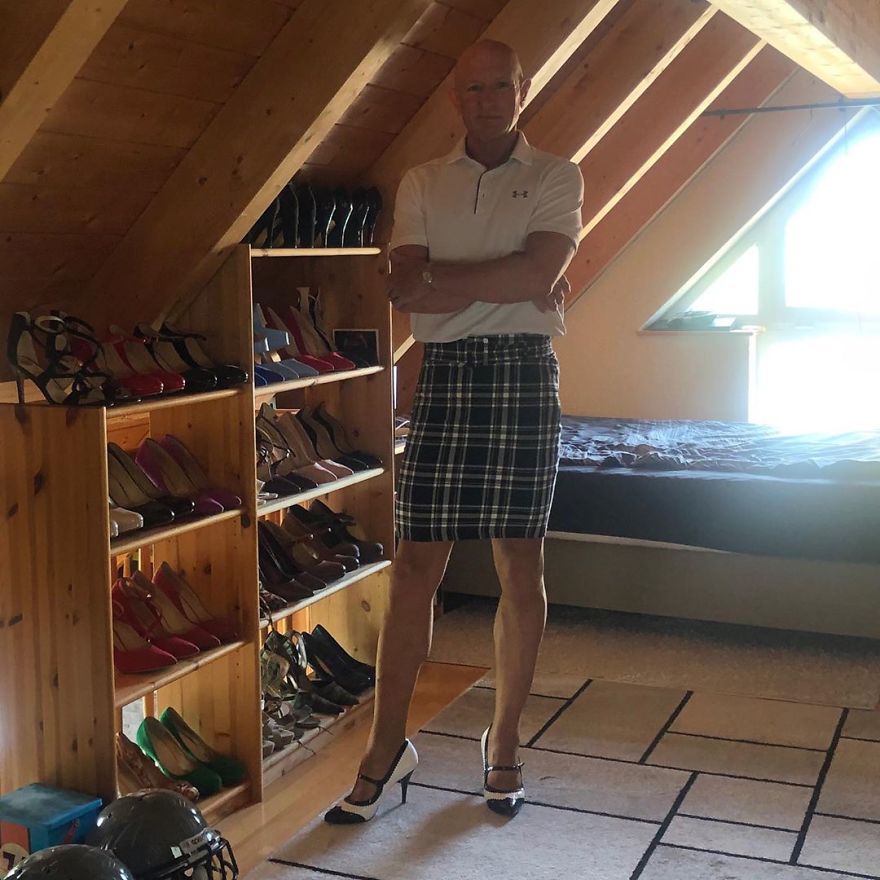 As per Mark, he does this for non-sexual reasons. He says, “Men can wear this style without being labeled as gay or queer. I don’t act like a sissy, which is one of the most frequent comments I get from men. They just assume I’m gay and a sissy until they start talking to me. I am just an average, normal, straight, and happily married guy. I love beautiful women, Porsche, and I just want to incorporate a skirt and heels into my daily wardrobe.” Do you think Mark is doing a good job breaking the gender stereotype in clothing? Let us know in the comments.