No one really loves borders! When God created Earth, it was without any boundaries except water. It was the greed of ‘Human’ which resulted in boundaries. Otherwise, the birds, rivers, and air have no boundation! Apart from India-Pakistan, North Korea – South Korea there are many Controversial Borders across the World. 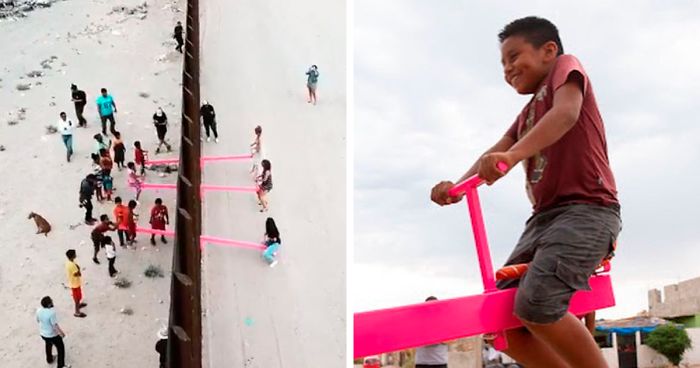 However, many times there are incidents that pinch us to get rid of the borders. Ronald Rael and Virginia San Fratello are two professors who were working on a decade long project of installing See-Saw on the US-Mexico Border. The Teetertotter Wall was finally made open to the public on this Monday.

With this post on Instagram, Rael described it as “one of the most incredible experiences of my… career” and an “event filled with joy, excitement, and togetherness”.

It is noteworthy, that there is fencing alongside the entire border of US-Mexico. The US also has a president who built his entire political career on this border between US-Mexico.

Although, there is so much hatred spread around the borders, incidents like this restore our faith in humanity.

Now, we can see kids playing around the fencing on the See-Saws. These pink color see saws are loved by kids from both sides. We can consider this as a historical event because the border between the US & Mexico comes into news only for odd reasons such as detention, death, and political posturing.

These innovative set of See-Saws are heartily welcome by kids from both countries. They even gather around and play on them.

Hats-Off to the duo which worked on this idea and made it possible for the kids of both countries to play with each other!