Republic Day India History – 26 January How is it Celebrated 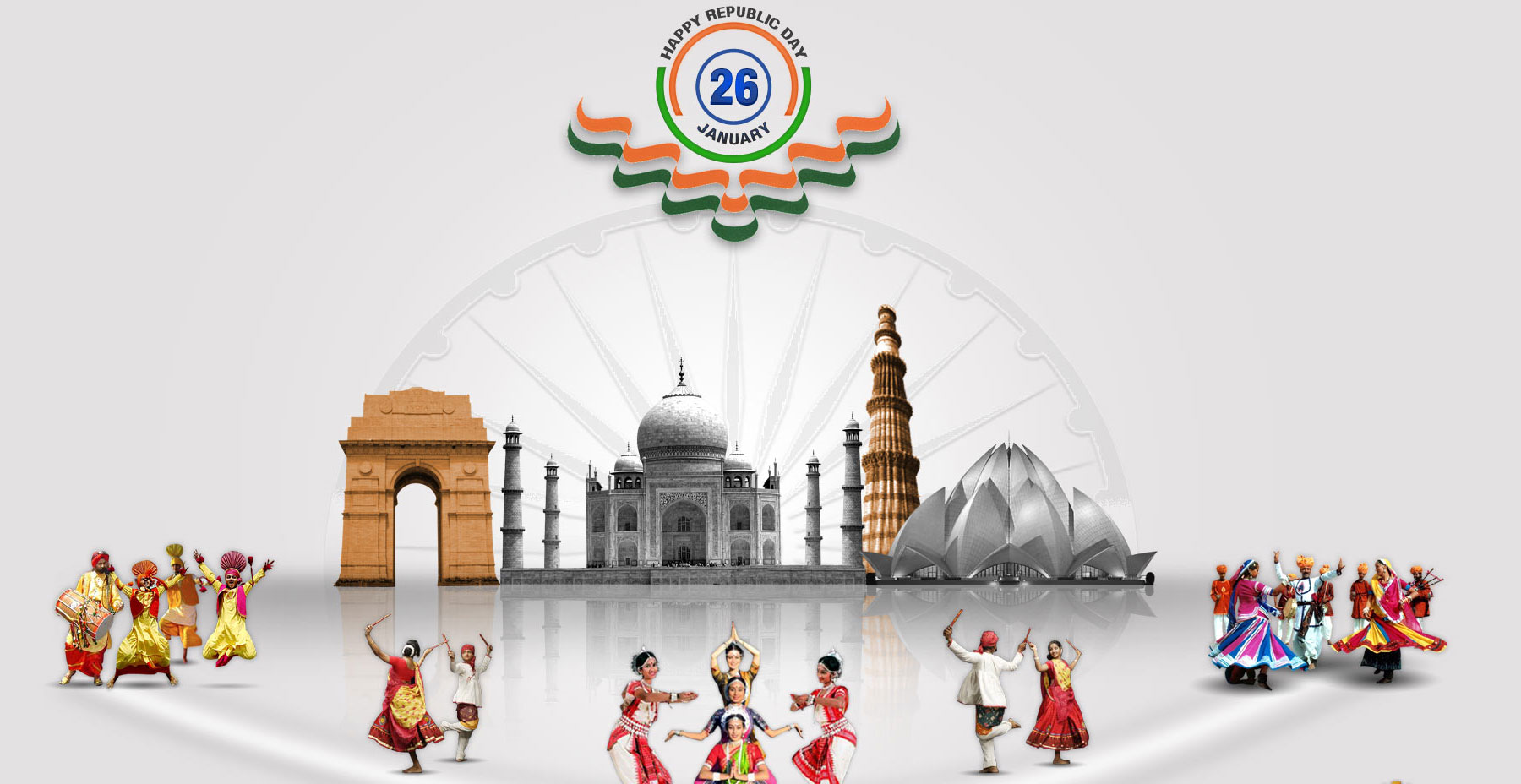 There are three most important moments of a country or community in an act of being successful. The first one when its free from under the clutches of someone else in power, the second one when it finds a path of its own figures out how it shall take the ruling of the country any further, and the third one is when the country realizes it is waxing towards the progress. The Republic of India sees this progress from being under the clutches of an external influence and a slave to them to rising and being an independent and republic star of its own. Let’s take a view of what the country has been through and the paths it has taken in its life towards happiness and independence.

Today I am going to tell you about why you must have celebrated Republic Day and how people in our country celebrate it. People on Independence Day and republic day enjoy the national holiday as on this day we pay respect to our freedom fighters and show love and respect towards our country. Not only in India but Indian citizens living in other countries too don’t forget to miss their country on these days and celebrate it by organizing a get-together party in which they invite their friends and talk about the various cultures and traditions of their country.

Schools, colleges, government offices, and universities have national holidays on republic day. According to the sources, this year we will see a new theme that is “Ramayana” which will represent the history of our country. We hope and pray that this year, we will not face terrorism and negative things and we will celebrate each and every festival with peace and happiness.

When and Why Republic Day is celebrated in India?

Republic Day of India is celebrated on 26th January every year religiously since 1950, after the Constitution of India got framed by the Constituent Assembly of India. The path of its success has been incremental since then. But did it happen in just one day? No. Nothing great has ever happened in the course of one day. This was the result of thousands of lives that people gave up for their country, another thousand who were determined to make this country free from the clutches of the incessant rule of another country so that their upcoming generation could breathe in the open air, the air of an independent country.

After many failed incidents like the 1847 rebuttal by the Indian farmers towards the Britishers, the various uprisings by the various freedom fighters whose names have been chalked out in the history like Chandrashekhar Azad, Bhagat Singh, Subhash Chandra Bose, Gandhi, and all those men, women and little children who were already in the Dandi marches, eagerly taking the beatings and proudly looking forward to fighting again, one another day. After India attained independence on 15th August 1947, it fell upon the leaders of the country that the country which has been ruled by someone else needs to have its own set of rules.

This followed the making of the Constituent Assembly of India which was instrumental in forming one of the biggest constitutions of the largest democracy in the world. The task on their shoulders wasn’t little, imagine forming a rule book for 350 people and now multiply it by 1000, yeah, that was the population of India when it was freed, 3.5 million. And this rulebook had to be something which would be forgoing, something that states to be true to mankind, this number would increase every day. Well, that stands corrected.

So, 389 people signed themselves up to be a member of the Constituent Assembly of India who was instrumental in finding out the nooks and corners of the Constitution of countries all over the world and formulate the perfect Constitution for the Republic of India. It took them a span of 2 years 11 months and 18 days to get this under effect and finalizing during which it went through the process of framing, discarding, reframing, and discarding, sharing it for public opinions with a larger set of audience and including their points of concern and again reframing, and so much more.

They had to keep the rights of minorities into the objective, the rights of women, the rights of kids, the punishment for the people who work towards the obstruction of justice. One of the main people over framing this constitution were Jawaharlal Nehru, C. Rajagopalachari, Valla Bhai Patel, Frank Anthony, Balwantrai Mehta, Abul Kalam Azad, Rajendra Prasad, and more.

India wants to be friends with many countries and these are the top countries that have been invited for watching the live parade. Let us see which countries are going to get this opportunity this year.

How Republic Day was celebrated in 1950?

We are the democratic, socialist, secular, and sovereign people of the country which assures that justice shall be imparted to us in the light of equality. 26th January, the Republic day, India, is celebrated every year as the national holiday which allows it to be celebrated in all the governmental institutions promoting judicial value, fraternity, equality to all the citizens of the country. This allows that all the people, rich or poor, male or female, who belong to any creed, caste, culture, or religion shall stay equal in the eyes of justice.

How Republic Day is Celebrated?

1) Every year on Republic Day India, there is a number of government and private institutions which conduct the celebrations at their own feasibility, may it be the marching grounds of the school or the Rajpath, the zeal at either of the places isn’t less. But again, the biggest celebration is held after the First Man of the country, the President of India. This celebration takes place in front of the Rajpath were so many people from all across the country come to attend this wonderful view of unity in diversity and get an upper hand view of our rich culture.

2) The parades that take place on Republic day proceed its marching from the Rashtrapati Bhawan also called the President of India, then cross the Raisina Hill that lies on the Rajpath, and then commences forward towards the seated area.

3) The parades include the display made by the defense forces where they portray the fineness and the official decorations that they carried out. These parades that are in commencement constitute different regiments ranging in number from 9 to 12. All the sections of the Defense force of India, that is the Army, the Navy, and the Airforce, are active participants in the procession.

4) There are many civilian forces that also make up to 12 contingents and carry out the parade in front of the President and the other chief guests and give a display of their ardent respect of the country which is no less than any devotee of the country.

5) People from various states and countries visit Delhi in order to watch the Rajpath parade live and after that, they go to some amazing restaurants and spend time with their loved ones.

6) Every display carried out is also broadcasted on the National Television to which there are millions of viewers who sit back at their home and get a first-hand view of the parades that honor our country. Before the day sees an end to the celebration of Republic Day of India, the President followed by the Chief Guests gives a speech.

7) The President of India’s speech on this prejudiced day reflects the country’s progress in a year and how is the country going ahead in its progress.

8) The celebration of the country’s Republic Day India is carried for 3 days. After the 3rd day, the Beating Retreat ceremony is held where on 29th January evening, the three wings of the Defense, the Navy, the Army, and the Air Force come together to make a display of their honorary festivities. This event held at Raisina Hill marked with an inclusion of the President is also accompanied by the Cavalry. The three-day celebration of Republic Day India sees an end to the celebration with the army bands playing the national song of ‘Jana Gana man’ and ‘Sare Jahan Se Acha’.

The celebration at the venue of Rajpath only started taking place after the year 1955. Until then there was no fixed venue. Republic Day India brings an opportunity for every Indian to keep a tab on the progress of the country and check for themselves how the country has been doing it on its own.

With the better state of GDP, the increase of India Rupee value against the Dollar, reduction in the number of crimes, the technological advancements of the country in terms of computers, constructions, infrastructure, science, rocket science and cosmology, medical sciences and so much more, India is considered to be the abode of intelligent and reliable people. Every night the Defense forces assure that we sleep safely in our bed while they throw a battle of the borders and the seas for the sake of our lives, even when we are not their responsibility any more than they are ours.

For such gratitude and fervor, such a love for the country and that too without any external force, the Republic day India makes an ardent display of how the love of our country is virulent in everyone’s heart.

It is true that India hit some major bumps on its road to success but it is laudable that how the Republic of India has been continually supporting the increasing population of the country which increased from 3.5 million to 1.3 billion and increasing.

The country has worked out for hours and years, day and night, to make the individuals and country as whole progress and reach a stage where it can fight the bumps on its own. The improved economy of the country in the year 2017, the stabilized prices of the stock market, the improved position of the commodities of the country in the international market, and recovering from the black money market after the demonetization phase gave a temporary setback.

As the late president would say, a country makes progress when the three main roles are instrumental in driving the nation forward. A mother, a father, and a teacher would only make the country reach the prideful place it deserves. So, this Republic Day India brings a big message which not only includes fighting with terrorism and inequalities fervidly but also including the three important societal pillars of the country as a governing body of the country.

Apart from these, there are many other ways through which you can celebrate republic day. We hope, you liked our article, keep visiting our website for more information and enjoy each and every festival of 2018. Happy Republic Day India!