World War 2 was a turning point in the history of Earth. Because of many famous and infamous incidents, many people still remember and recall the stories of that period. Among all such stories, the Battle of Midway is something that missed the attention of some historians.

But, Hollywood is always keen on creating movies on stories that should’ve got attention earlier. The upcoming movie Midway is one such movie that will drag you back to the time of WWII.

War movies have it’s own one of its kind glamour and curiosity. Here are some of the top reasons why you shouldn’t miss watching this movie.

Why You Should Watch Midway? 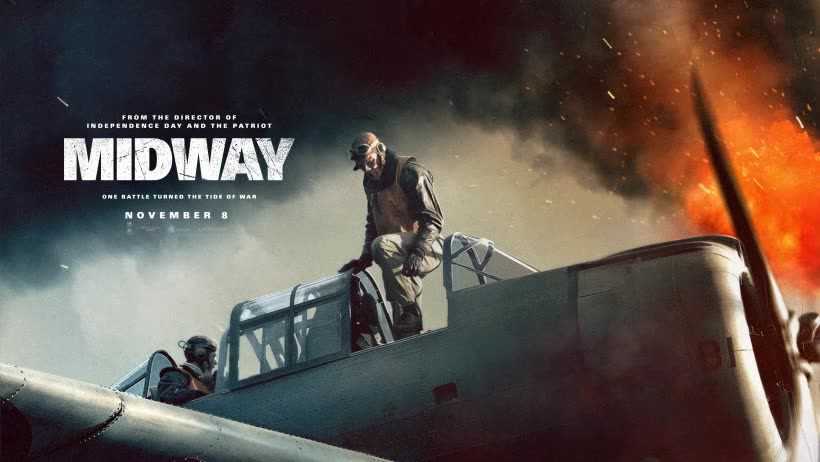 Wondering why we are insisting you this much? Here are the reasons!

1) It drags you to the history of World War 2

When it comes to war movies, we are having many names on our mouths. The history of the USA is filled with many deadly wars. But, the Battle of Midway was something unique. In this movie, you will get a glimpse that How the US Naval Army defeated the troops of the Imperial Japanese Navy.

2) A movie for People with American Pride

We have to accept that World War 2 was the war, which made the US, superpower of the World. Apart from that, the Battle of Midway was the American response to Japan’s attack on Pearl Harbor. Therefore, the people who wish to witness that American Pride moment, this is the movie for you.

Since it is a war movie, it is obvious that there will be a lot of action scenes in it. We have to credit the direction and story of the movie. With the proper use of technology, all the scenes seem to be extremely realistic and lively. Therefore, while watching the movie you will feel what a real war feels like!

4) The trailer is very exciting!

Trailer is the best parameter to judge a movie. While you will watch this trailer, you will get an idea of the Midway Movie. Through the trailer, you will see the emotions, the action scenes which will give you goosebumps. Did you feel those goosebumps? If yes, then this is the movie you shouldn’t miss.

5) There is a lot of suspense in the Movie!

Some of the stories of the battleground never come out in public. It can be either one part story of the battle or it even could be an entire myth. We must credit the writer of the movie Wes Tooke who did a lot of research while writing the script. He laid a lot of effort so that the interest of the viewer is maintained in the movie.

6) And the star cast is also amazing

As you’re familiar, the war movies are having a huge star cast. With names like Nick Jonas, Ed Skrein, Patrick Wilson and many more, you will always stick to the screen, no matter what.

7) It covers all the sides of the war

War has many sides to cover. What would you like to see? The US side? or the Japanese Side? or from the angle of the people who were residing there. Although your country’s reputation is at stake, no one really wants a war. This angle is clearly reflected in the Midway movie.

8) Director and Producer Roland Emmerich is famous for such movies

Roland Emmerich, who is the director as well as producer of the movie is well known for being part of such movies. Prior to Midway, he has movies such as Isobar, American Revolutionary War, Anonymous, Godzilla, Stargate and many more. Hence, his expertise has helped in making the next level Midway Movie.

9) The shooting is done at many beautiful locations!

Midway Movie is shot in the beautiful land of Honolulu, Hawaii. While some of the scenes are shot in Montreal, Quebec. Therefore, you will also get to enjoy the scenic beauty of all these places while watching the movie. Aren’t you excited about it?

10) See what Distributor Lionsgate has to say about the Movie!

Lionsgate, the distributor of the movie describes it as,

“The film, based on the real-life events of this heroic feat, tells the story of the leaders and soldiers who used their instincts, fortitude, and bravery to overcome the odds.”

How can you miss watching such a movie?

The movie is all set to release in India and Worldwide on this 8th of November. In India, PVR Pictures is taking care of the entire release. Many people, who have a keen interest in history or specifically in Wars, they are eagerly waiting for it. Are you the one? Then you must go & watch this movie.