by Shreya Srivastava 3 years ago3 years ago
6.9kviews
96

Trollers, gonna troll and no one can protect celebs or any other personality from getting trolled on social media. Recently the desi girl of Bollywood, Priyanka Chopra Jonas has been trolled for smoking on a yacht in Miami.

Trollers and antagonists are flinging Priyanka Chopra for the stuff she did and calling this entire matter as “hypocrisy” after the next minute Priyanka Chopra shared snapshots on her Instagram account in which she is smoking a cigarette with her family. 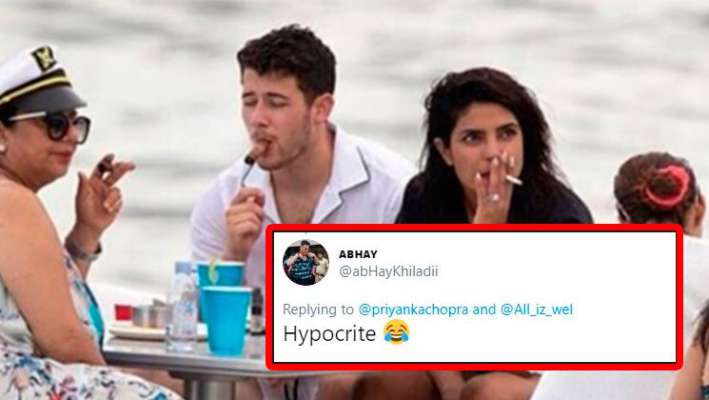 Priyanka Chopra just celebrated her birthday on 18th July and savored with the Jonas group on a sloop in Miami. In the pictures shared by Priyanka, there is Nick Jonas her spouse, Madhu Chopra her mommy and all three of them are having a relaxing moment.

In the same, Nick and Madhu were enjoying the cigar whereas Priyanka is smoking cigarette. This is the scene which gave an opportunity to trollers to slam her and trollers took all the advantage of that opportunity.

There were various comments on her picture by trollers, some of them are mentioned below:

And the reason behind this much hate and comments for her is because she shared a video clip in which she is telling people not to burn crackers and said, “Please meri saans ko berok rakhiye. Diwali pe crackers ko skip kariye.” She also added to it that the Diwali festival is about love and sweets and not pollution. Seems like hypocrisy is controlling her!