Written by Rohan Pandya Published on May 3, 2016

This year in IPL Irfan Pathan the famous left arm fast bowler who was selected by Pune SuperGiants in the IPL auction has played only one match. He definitely deserves a chance.  Irfan has number of records on his name and was tipped to be the next Kapil Dev of team india as he is one of the very rare breed in Indian Cricket you’ll not get to see easily.

Irfan Pathan has played 29 Test matches and with batting average of 31.77 in test cricket and has 226 wickets from 79 Tests at 32.78. But it is very unfortunate that he has not played Test cricket since 2008. Both the Pathan brothers (Irfan & Yusuf) has been a centre of attraction in IPL for getting sold at a very high price in the Auction. Irfan was selected by Chennai Super kings in IPL 2015 and was injured for the initial season but then he was literally ignored as had to miss 17 matched in IPL last year. Ronit More a young pacer will very less experience was preferred ahead of Irfan by Dhoni.

Recently Irfan performed very well in the Sayad Mushtaq Ali Trophy in which he was the highest wicket taker in the season, he showed all round performance by scoring 200 runs in the tournament at a strike rate of almost 153. He was almost selected for Asia cup and World T20 but due to turning wicket Pawan Negi was given chance ahead of Irfan Pathan. 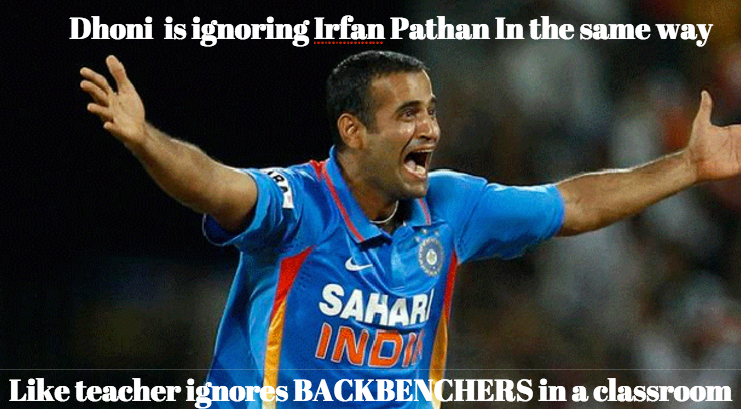 In IPL 2016 Irfan had to sit in the dugout for the first 2 games and was picked for the next game only when Dhoni’s dear friend RP Singh went for 51 in his five overs in two games. Again after picking Irfan he was called to bowl in the 10th over. Are you kidding me DHONI ? You call your best swing bowler to bowl in the 10th over of a T20 game.

This is not it, Irfan got to bowl only 1 over in which he gave only 7 runs. What next ? Irfan was dropped in the next match. Dhoni if you can give chance to your best friends Ravindra Jadeja and R Ashwin in team india then why can’t you be fair enough and give chance to Irfan Pathan ?