One knows that SS Rajamouli’s Baahubali created a spark worldwide when it was released this July. Ultimately the spark which was created broke several records and was praised all over the nation for its story, dedication of the whole team and the Vfx used in the film. With so many records, the film has added one more record to its name. It has been asked a question in  an exam of the civil engineering department of the prestigious Vellore Institute of Technology. 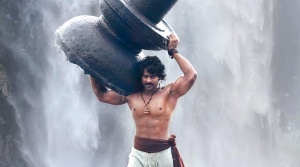 No student can ever guess that in his exam question paper he will be asked questions related to a movie. But here is the case where during the internal assessment consisted of two questions each of ten marks and asking the students design engineering set-pieces for the shoot of Baahubali – The conclusion war sequences. So here the students had to fill in the shoes of the film’s set engineer and calculate the optimum structural stability of the battle sets to ensure the safety of the actors in the structural operation question paper. And with such questions one can easily know how hard it will be to answer.

The assistant Professor who included these questions said that he was aware what he was doing as it is connected with one’s everyday lives respective towards different cultures and and artistic references. Another Proud Moment for SS Rajamouli’s  Baahubali.